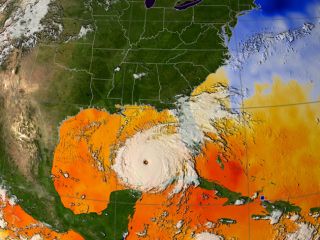 This visualization shows the sea surface temperature from September 17 to September 21 when temperatures in the Gulf of Mexico remained one to two degrees warmer than the 82 degree minimum needed to sustain a hurricane. Every area in yellow, orange or red represents 82 degrees F or above. Temperature data is from the AMSR-E instrument on the Aqua satellite, while the cloud images of Hurricane Rita were taken by the Imager on the GOES-12 satellite.
(Image: © NASA.)

CAPE CANAVERAL - A directhit to Galveston by Hurricane Rita could cause extensive flooding and damage toJohnson Space Center and the homes of thousands of NASA and contract workers,government and university documents show.

A storm surge of more than22 feet could wash across the home of NASA's Mission Control Center, which islocated less than a mile from Galveston Bay in a low-lying area already prone toflooding, the documents show. [Click herefor an animation of how flooding may affect the region based on orbital data.]

The prospect fordevastation prompted NASA on Thursday to evacuate an 82-member emergency crewthat had planned to ride out the storm at the center -- a move indicative ofdanger posed by Rita.

"Given the size andstrength of the storm, we decided not to take any chances," said AllardBeutel, a spokesman for NASA headquarters in Washington.

"The fear is mostlyfrom flooding, from tidal surge. There were estimates that showed the stormwould put five feet of water throughout the center if they had a 22-foot stormsurge."

Normal operations shut downWednesday at JSC, which is NASA's primary center for design, development andtesting of human spacecraft and systems.

The center is home toNASA's astronauts. Both the shuttle and International Space Station programsare managed there. At Mission Control, flight engineers keep a round-the-clockvigil on the orbiting outpost.

Primary control of thestation has been transferred to Russia's Mission Control Center outside Moscowuntil the storm passes.

The 13,000 NASA andcontractor employees who work at JSC primarily live in surrounding suburbs thatalso would be swamped if Rita comes ashore at Galveston.

Government storm surgestudies and maps show the 1,620-acre center -- which sits 20 to 30 feet abovesea level -- would be washed over with water in any Category 3, Category 4 orCategory 5 hurricane that came ashore near Galveston.

The university's Center forSpace Research recently completed a storm surge study of a remarkably similar,but theoretical, storm based on data from Hurricane Carla in September 1961.

In Harris County, where JSCis located, wind damage alone would cause $36 billion in damage, the studyshows. Some 121,661 homes would be destroyed or severely damaged and another253,666 would sustain minor or moderate damage. The number of households affected:1.2 million.

It's too early to predicthow much damage Rita might cause at JSC, said Gordon Wells, the Center forSpace Research program manager who led the study.

The hurricane took asharper-than-expected turn to the north Wednesday afternoon, and storm modelsshowed Galveston and Houston might dodge a direct hit.

"So we'll hope for thebest and hope that this storm continues on its course along the modeltrack," Wells said. "That would take potential damage away fromHarris County, which would be good news for JSC."

In the past 12 months, twoNASA centers and a shuttle external tank factory have been battered byhurricanes.