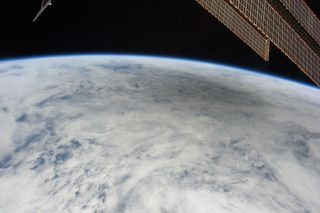 This is one of a series of photos taken by Expedition 31 Flight Engineer Don Pettit aboard the International Space Station, showing a shadow of the moon created by the May 20, 2012 solar eclipse, as the shadow spreads across cloud cover on Earth. Pettit used a 28-mm lens on a digital still camera.
(Image: © Don Pettit)

As millions of skywatchers gazed up at a dazzling solar eclipse on Sunday, one astronaut was amazed by looking down at the eclipse's shadow moving across the Earth.

"It is amazing to see an eclipse from orbit," Pettit told Mission Control while describing the event Monday. "The shadow on Earth looks just like what you see in the physics books and the astronomy book where those folks figured all that out without ever having seen what that shadow looks like."

NASA posted three of Pettit's photos of the annular solar eclipse shadow to his Expedition 31 mission's gallery, and the astronaut unveiled them online in his blog "Letters to Earth." Pettit used a 28-mm lens on a digital still camera to snap the photos at about 7:36 p.m. EDT (2336 GMT) on Sunday. [See Solar Eclipse Pictures from Space & Earth]

Sunday's solar eclipse was a rare celestial sight in which the moon lined up between the Earth and sun, but did not completely block out the star. Because the moon was at apogee, its farthest point from Earth in its orbit, it was too far from Earth to completely cover the sun's disk, leaving a dazzling "ring of fire" that amazed millions of skywatchers in the eclipse's path between southern China and Texas.

For Pettit and the rest of the space station crew, however, the most eye-popping site was the moon's shadow, which is split into two parts; the umbra, or darker central part, and the penumbra, the paler outer part of the lunar shadow.

Astronauts have seen solar eclipse shadows from space several times in the past from the International Space Station, as well as from other spacecraft like Russia's Mir space station.

On Sunday, the station astronauts were not the only ones with a view of the eclipse from space.

NASA's Terra satellite spotted an amazing view of the moon's shadow crossing the Pacific Ocean. Two other satellites —the European Proba-2  and Japan's Hinode solar observatory — captured spectacular video of the moon crossing the sun during the eclipse.

The next solar eclipse will be the total solar eclipse of Nov. 13. That eclipse, however, will only be visible from the South Pacific Ocean and parts of northern Australia.