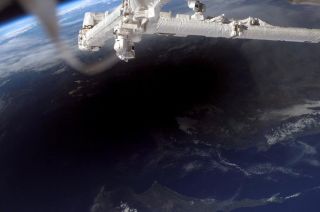 The International Space Station (ISS) was in position to view the umbral (ground) shadow cast by the moon as it moved between Earth and the sun during a solar eclipse on March 29, 2006. This astronaut image captures the umbral shadow across southern Turkey, northern Cyprus and the Mediterranean Sea.
(Image: © NASA)

When the moon blocks the sun in a rare "ring of fire" solar eclipse Sunday (May 20), six astronauts living in space just might see the shadow on Earth created by the event from their home in space, NASA officials say.

The International Space Station crew will likely not see the peak of the solar eclipse, but the astronauts may see the shadow from a partial solar eclipse as it moves across the Pacific Ocean, NASA spokesman Bill Jeffs told SPACE.com.

"They may be able to see the moon’s shadow as a disc on Earth when they are nearest the full eclipse point at 23:36 (between Kamchatka [Peninsula] and the Aleutian Islands)," Jeffs told SPACE.com in an email. The space station crew operates on Greenwich Mean Time (Universal Time), putting their time closest to the eclipse's peak at about 7:36 p.m. EDT.

On Earth, observers along a wide section of East Asia, the Pacific Ocean and western United States will also see a partial solar eclipse. Other observers, located along the center line of the eclipse's path, will see the moon block out 94 percent of the sun, weather permitting. [Annular Solar Eclipse of May 20 (A Photo Guide)]

Sunday's solar eclipse is a relatively rare event known as an annular solar eclipse, an eclipse in which the moon is at a point in its orbit that makes it too small (as viewed from Earth) to completely block the sun. Instead, the moon blocks most of the sun, leaving a ring of light (formally known as an "annulus"), that can be a dazzling sight to onlookers observing through safe solar filters. The effect is also known informally as a "ring of fire" solar eclipse.

The eclipse's so-called "path of annularity" begins in China's Gulf of Tongking, to the north-northwest of Hainan Island, where the local time will actually be May 21. The moon's shadow then moves east, passing over Tokyo, Japan, and heading out over the Pacific Ocean before making landfall in northern California and crossing seven other western U.S. states to end in northwestern Texas at sunset.

But exactly what the space station crew may see remains to be seen.

Past observations of solar eclipse shadows from space have revealed dark, roughly circular blemishes on Earth. During solar eclipses, this shadow moves across the Earth at a speed of about 1,243 mph (2,000 kph).

The space station is currently home to two Americans, three Russians and one Dutch astronaut. The crew is scheduled to be in its sleep period during the best times to see the eclipse shadow from space, Jeffs said.

However, one of the American astronauts — NASA veteran Don Pettit — has been a prolific photographer of Earth from space and it is possible he or his crewmates may make an effort to observe the moon's shadow making its way across the western Pacific Ocean.

Editor's note: If you snap a great photo of Sunday's annular solar eclipse and would like it to be considered for use in a story or gallery, please send images and comments to SPACE.com managing editor Tariq Malik at tmalik@space.com.