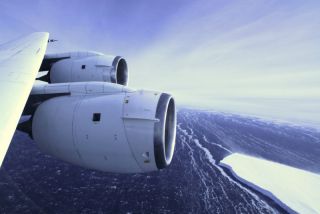 A NASA aircraft, part of the agency's IceBridge mission, banks over an ice shelf jutting out from western Antarctica during an October 2011 data-gathering flight.
(Image: © Jefferson Beck/NASA)

A gigantic plain of ice clinging to the edge of Antarctica is splitting in two. The Pine Island Glacier ice shelf is giving birth to a giant iceberg, and NASA scientists happened to be on hand to catch some stunning, up-close views of the action.

In a new OurAmazingPlanet video, viewers can take a vicarious trip to Antarctica

to see the icy canyon, which is nearly 20 miles (32 kilometers) long, and learn why scientists are so interested in this lonely stretch of ice, which is the floating front end of the Pine Island Glacier.

The Pine Island Glacier (also known as PIG) and its ice shelf are getting a lot of attention from scientists these days.

The glacier, which moves ice from the interior of the continent and into the sea, has sped up markedly in the last decade. It is now one of the fastest glaciers in Antarctica, speeding along at a clip of about 2.5 miles (4 km) per year.

And although the ice sheet that covers East Antarctica appears to be fairly stable, ice in West Antarctica — the home of PIG, and many other glaciers — is changing and disappearing at a far faster rate than anyone thought was possible several decades ago.

Changes in the ice have big implications for people everywhere; when ice slides off the continent and into the sea, it raises sea levels around the world.