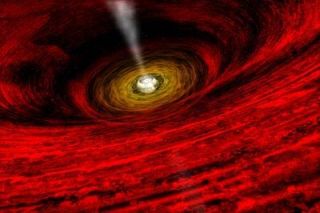 The intense energy and winds from gigantic black holes can block the birth of stars as scientists have long suspected, a new analysis of distant galaxies reveals.

Most galaxies, including our own Milky Way, are thought to have supermassive black holes at their hearts. Some of these monster black holes are relatively calm, but others, known as "active galactic nuclei," or AGN, can spew out more radiation than our entire galaxy does, and from a patch of space no larger than our solar system.

Scientists had long thought all this energy from active galactic nuclei quenched the formation of stars around them.

"There is so much energy in the radiation coming out from the AGNs, that if the surrounding gas absorbs just a small fraction — about one-twentieth will do it — it will have enough energy to escape from the host galaxy, and effectively becomes a wind clearing the galaxy of gas," said study lead author Mathew Page, an astrophysicist at University College London. "Once the gas has been heated up and driven out, there's no material from which to form stars." [Gallery: Black Holes of the Universe]

Proving whether this star-stifling occurs has been a problem because measuring star formation in galaxies containing powerful active galactic nuclei has long been difficult. The radiation from these jumbo black holes outshines that from star formation in nearly all wavelengths of light.

The best chance to find this evidence lies in the far-infrared to millimeter wavelengths of the electromagnetic spectrum, since active galactic nuclei emit comparatively little radiation at these wavelengths.

In the new study, scientists combined observations of far-infrared to millimeter wavelengths, which shed light on star formation, with those of X-rays, which are clear signs of active galactic nuclei, to help show these supermassive black holes apparently do suppress star formation.

"Even though the black hole is little more than a speck in size compared to the galaxy, basically that speck controls the fate of the whole galaxy," Page told SPACE.com.

The research is detailed in tomorrow's (May 10) issue of the journal Nature.

Submillimeter observations from the Herschel Space Observatory revealed that rapid star formation was common in the host galaxies of active galactic nuclei when the universe was 2 billion to 6 billion years old. However, X-ray observations from the Chandra X-ray Observatory showed that vigorous star formation was not seen around black holes that had X-ray luminosities of 10^44 ergs per second. (An erg is a unit of energy, and 10^44 is short for a 1 with 44 zeroes behind it.)

All this energy should be enough to drive powerful outflows of gas, stripping the areas around the black holes of stellar construction materials.

Future research can focus on "catching some galaxies as they're actually going through the stage of having their star formation switched off, rather than seeing them before or after, as we do for most of the objects we've looked at here," Page said. "The biggest obstacle to that is the need to have infrared and X-ray observatories in space. A successor to the Chandra and XMM-Newton X-ray observatories is what I'd like."