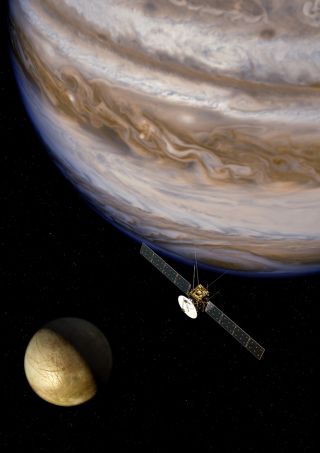 The European Space Agency will launch a deep-space mission to explore the icy moons of Jupiter in 2022, agency officials announced Tuesday (May 2).

The JUICE mission to Jupiter is the first major mission selected by ESA under the agency's Cosmic Vision 2015-2025 program. It beat out two other proposed missions; a space observatory to hunt gravity waves and an advanced high-energy astrophysics telescope.

"Jupiter is the archetype for the giant planets of the Solar System and for many giant planets being found around other stars," said Alvaro Giménez Cañete, ESA's director of Science and Robotic Exploration, in statement. "JUICE will give us better insight into how gas giants and their orbiting worlds form, and their potential for hosting life." [Best Missions to Explore Jupiter]

The JUICE spacecraft is a solar-powered orbiter that will spend seven-and-a-half years cruising to Jupiter after its launch. Once at its destination, the probe will study Jupiter's atmosphere and magnetosphere, and investigate how the so-called Galilean moons (Callista, Europa, Ganymede and Io) interact with the gas giant, ESA officials said.

The mission is expected to cost about $1.1 billion (870 million euros). According to its mission plan, the JUICE probe is expected to conduct an extensive survey of Jupiter's largest moons.

The spacecraft will take a close look at the crater-covered Callisto, the most battered object in the solar system, and fly by the icy moon Europa twice. At Europa, JUICE is expected to record the first-ever measurements of the moon's icy crust, and seek out potential landing sites for future missions, ESA officials said.

In 2032, the JUICE probe will enter orbit around Ganymede, which is Jupiter's largest moon and the biggest moon around any planet in our solar system. Ganymede is the only moon in the solar system known to harbor its own magnetic field. The JUICE mission aims to study that magnetic field, as well as map the moon's icy surface and probe its interior structure, which may conceal a subsurface ocean, ESA officials said.

ESA's Cosmic Vision 2015-2025 program aims to develop space missions that seek to better understand how planets form and what conditions allow life to arise. Its main goals also include investigating how the solar system works, the fundamental laws of the universe, as well as how the universe began in the first place and what it is made of, according to an ESA description.

The decision to pick the JUICE probe from among the three finalists for the first Large Class (or L-class) mission was a tough one, ESA officials added. The selection process officially began in 2007.

"It was a difficult decision to choose one mission from three excellent candidates. All three would produce world-class science and put Europe at the forefront of space research," Giménez Cañete said. "JUICE is a necessary step for the future exploration of our outer solar system."

The next call for new ESA L-class candidate missions to explore the solar system is expected in 2013.

JUICE is not the only new mission aimed at the planet Jupiter. NASA's Juno mission launched toward the planet in August 2011 and is expected to arrive at Jupiter in 2016.