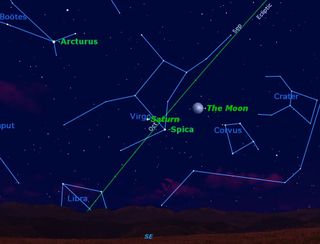 Thursday night May 3 there will be a triple conjunction of the moon, the planet Saturn, and the bright star Spica.
(Image: © Starry Night Software)

Look toward the southeast on Thursday night (May 3) about an hour after sunset, and you will behold a rare and beautiful sight, a triple conjunction of the moon, the planet Saturn, and the bright star Spica.

A conjunction occurs when two or more astronomical objects are close together in the sky. In reality they are far apart in space; their closeness is just an effect of perspective. In astrology such close encounters are supposed to cause serious effects, but astronomers know that conjunctions are nothing more than a beautiful sight and a photo opportunity.

Because Saturn is the farthest planet from the sun visible to the naked eye, its movements in our sky are very slow. It has been in the constellation Virgo, close to Spica, for a couple of years now. The moon, on the other hand, is very close to Earth, so appears to move relatively quickly across the sky.

These sky maps of Saturn and the moon for this guide show how they will appear with Spica on Thursday and Friday.

Astronomers measure distances in the sky in degrees, a complete circle being 360 degrees. The moon takes 27.3 days to complete its 360 degree trip around the sky, so moves 13.2 degrees in one night. By comparing the views Thursday and Friday night you can see this with your own eyes.

The moon will look "full" on both these nights to the naked eye. A look with a telescope will reveal that it is not truly full, but has a clear "terminator" or shadow line on its eastern limb. This shows that it is still in its waxing gibbous phase. True full moon does not occur until Saturday night at 11:35 p.m. EDT. This full moon will actually be the largest and brightest of the year, as it is a "supermoon" —a coincidence of full moon falling at the same time as the moon's perigee, or closest approach to Earth.

Though conjunctions like this have no physical significance, they do make for excellent photo opportunities.

If you observe an hour after sunset, the moon will appear impressively large to your naked eye, but will probably disappoint you in a photograph. This is because the moon's apparent large size is actually an optical illusion known as "the moon illusion." To duplicate this illusion in a picture, you need to resort to a little trick photography. Adjust your zoom lens to its maximum setting. This will make the moon loom large relative to foreground objects, and duplicate what the human eye and brain appear to see.