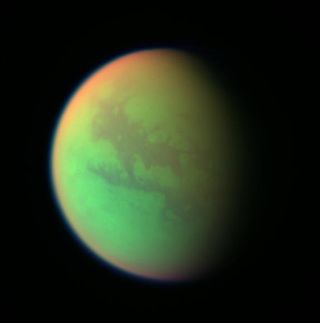 Recent findings from NASA's Cassini spacecraft and new discoveries about organisms here on Earth that thrive in extreme conditions are causing scientists to rethink the possibility that there may be life on Saturn's cloudy moon Titan.

Discovered in 1655 by a Dutch astronomer, Titan is the second largest moon in the solar system apart from Jupiter's Ganymede. Looking around, a person standing on Titan's surface would see rocky fields strewn with small ice pebbles. Gazing up, one would see clouds racing across the orange Titan sky as if on fast forward, because like Venus, Titan's atmosphere rotates much faster than its surface. Saturn and its magnificent rings would not be visible most of the time, due to the dense haze of orange smog that blankets the entire moon.

Scientists are interested in Titan because it reminds them of how Earth was billions of years before life existed. Titan is colder (-289 degrees Fahrenheit, or -178 Celsius) than primitive Earth was, but it has a dense nitrogen-rich atmosphere and a natural process for producing hydrogen and carbon containing molecules called hydrocarbons that are essential for life on Earth. Astronomers have long seen Titan as a place that had the preconditions for life, but most scientists saw it as too inhospitable to actually contain biology today.

The Sun's ultraviolet light reacts with nitrogen and methane high in the upper reaches of Titan's atmosphere, producing the orange smog and a steady stream of organic materials that fall steadily onto the moon's surface.

Many of the natural forces that shape the Earth's landscape are also active on Titan, including shifting continental plates, wind erosion, possibly oceans-albeit of ethane and methane and not water-and volcanoes. On Earth, these forces raise mountains and carve canyons, yet much of Titan's surface looks smooth, leading many scientists to suspect that the moon is relatively young.

If life does exist on Titan, a good place to look for it may be in hot springs connected to hydrocarbon reservoirs, said David Grinspoon, a researcher at SwRI's Space Science and Engineering Division.

Further fueling speculations about life on Titan are recent findings that microscopic organisms that live in extreme environments on Earth are hardier and capable of surviving in environments much harsher than anyone ever imagined.

One recently discovered species of so-called extremophiles could live in briny environments ten times saltier than seawater. Another species found in Yellowstone National Park could live off nothing but hydrogen, the most abundant element in the universe.

Perhaps most relevant for life on Titan, scientists have discovered within the past two decades several species of bacteria that thrive in freezing temperatures. Called psychrophiles, these organisms live in temperatures ranging from 23 to 68 degrees Fahrenheit (-5 to 20 degrees Celsius) and use methane to produce energy.

Scientists knew that if life did exist on Titan, it might need to have a combination of these traits, so the discovery that such life actually does exists is highly encouraging.

Grinspoon speculated that life on Titan, if there is any, might be able to produce energy by mixing acetylene, a hydrocarbon abundant in Titan's atmosphere, with hydrogen. The energy could then be harnessed to power metabolism or to heat their surroundings.

"In environments that are energy-rich but liquid-poor, like near the surface of Titan, natural selection may favor organisms that use their metabolic heat to melt their own watering holes," Grinspoon said.

The researchers presented their ideas Sept. 8 at the 2005 Meeting for the American Astronomical Society's Division for Planetary Sciences.