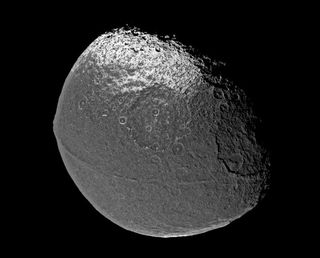 A ridge that follows the equator of Saturn's moon Iapetus gives it the appearance of a giant walnut. The ridge, photographed in 2004 by the Cassini spacecraft, is 100 kilometers (62 miles) wide and at times 20 kilometers (12 miles) high. (The peak of Mount Everest, by comparison, is 5.5 miles above sea level.) Scientists are debating how the ridge might have formed.
(Image: © NASA/JPL/Space Science Institute. Full story.)

From an expedition to explore auroras to sun's sibling stars, it's been a busy week in space. Vote for the week's best space story.

Earth may have seeded life on other planets if DNA traveled from our world to another via an impacting asteroid that later landed on an alien planet. Astronomers are searching for siblings of the sun -- stars born from the same parent star cluster -- that might have planets impregnated with Earth life. [Full Story]

The giant ridge around the middle of Saturn moon's Iapetus that makes it resemble a gigantic walnut may have essentially formed as a hug from a dead moon, researchers say. [Full Story]

Astronauts aboard the International Space Station are preparing for the historic arrival of a privately built robot cargo ship, the first ever to visit the orbiting laboratory, later this month. [Full Story]

The pesky reality that the universe's expansion is accelerating — an observation that prompted astronomers to invoke an unknown entity called dark energy to explain it — has been further confirmed by new measurements. [Full Story]

A defiant North Korea attempted to launch its new long-range rocket early Friday despite international warnings to stand down, but the vehicle failed to reach space and apparently crashed into the sea, according to press reports. [Full Story]

NEXT: Pulsing Stars Could Probe Space-Time Around Black Holes

A new study demonstrates that pulsars found around the Milky Way’s black hole, Sgr A*, could permit a detailed investigation of the spacetime of the supermassive black hole. The constant flash of a single pulsar could provide opportunities to test general relativity. [Full Story]

NEXT: How NASA Moves Space Shuttles: The Ultimate Piggyback Ride

A look at the complicated mechanics of transporting the retired space shuttles, atop Boeing jets, to their future museum homes. [Full Story]

NEXT: Billionaire Elon Musk Opens Up About Private Spaceflight Challenges

SpaceX CEO Elon Musk discusses the challenges of preparing for the company's upcoming flight of the robotic Dragon capsule to the International Space Station. [Full Story]

NASA's new Mars exploration strategy will be guided by an old goal: searching for signs of life on the Red Planet. [Full Story]

A young star that is home to at least one alien planet is also ringed by a vast, dusty cloud of comets, like our own solar system. But there's a big difference: There may be as many as 83 trillion comets there, with collisions destroying thousands each day, a new study suggests. [Full Story]