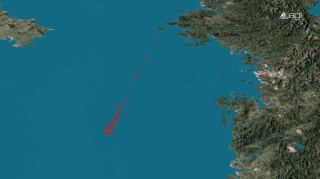 North Korea officially acknowledged the failure of its latest rocket launch Friday (April 13) in a rare admission from the reclusive nation, which defied international warnings not to launch what the United States and other countries saw as a missile weapons test.

According to a brief statement from state-run Korean Central News Agency, North Korean scientists and engineers will review the Unha-3 rocket failure to determine what went wrong. The statement was released more than four hours after the failed Unha-3 rocket launch, according to South Korea's Yonhap News Agency, which published the account.

"The Earth-observation satellite failed to enter its preset orbit," the KCNA statement stated.

The statement is a departure from North Korea's two previous launch failures, in 1998 and 2009, when the country insisted the attempts were successful. In an unprecedented move, North Korea also invited foreign journalists to tour the Unha-3 rocket's launch site and access other space program facilities ahead of the launch. [Complete Coverage: N. Korea's Rocket Launch]

North Korean officials have said the rocket was carrying a small weather- and Earth-monitoring satellite called Kwangmyongsong-3, and that the launch was timed to honor the 100th anniversary of the birth of the country's founder, Kim Il Sung. Officials in the United States, Japan and South Korea stated the launch was a veiled ballistic missile test, which North Korea is forbidden to perform under United Nations Security Council resolutions.

The fact that North Korea went through with the launch despite repeated warnings to desist from the United States and others will likely result in future sanctions, such as the loss of food aid, for the impoverished nation.

"While this action is not surprising given North Korea's pattern of aggressive behavior, any missile activity by North Korea is of concern to the international community," White House press secretary Jay Carney said in a statement. "The United States remains vigilant in the face of North Korean provocations, and is fully committed to the security of our allies in the region."

"The missile was tracked on a southerly launch over the Yellow Sea," the North American Aerospace Defense Command announced in a statement. "Initial indications are that the first stage of the missile fell into the sea 165 km west of Seoul, South Korea."

"At no time were the missile or the resultant debris a threat," NORAD officials said.

North Korea's Unha-3 rocket is thought to be an advanced version of the country's TaepoDong-2 missile. It is a three-stage booster and stands about 100 feet (30 meters) tall. The rocket blasted off from the new Sohae Satellite Launching Station located in northwestern North Korea near the village of Tongchang-ri.