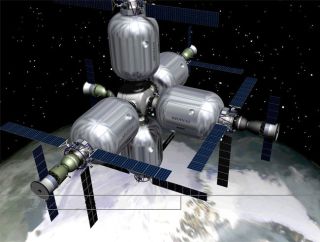 A test of an inflatable Earth orbiting module is slated for liftoff early next year, bankrolled by a go-it-alone, do-it-yourself entrepreneur keen on providing commercial space habitats for research and manufacturing, among other duties.

Bigelow Aerospace of North Las Vegas, Nevada is readying a test prototype of the firm's expandable habitat design and looking to launch the hardware in the first quarter of 2006.

Providing the financial fuel for the project is businessman, Robert Bigelow, owner of the Budget Suites of America Hotel Chain among other enterprises, and head of Bigelow Aerospace.

The one-third scale version of a larger Bigelow inflatable module is dubbed Genesis. It will be lofted into space atop a Dnepr booster under contract with ISC Kosmotras, a Russian and Ukrainian rocket-for-hire company. A second Genesis module is also slated to be orbited, perhaps later next year too. Both inflatable structures are to circle Earth for several years and be thoroughly evaluated.

"We are taking a robust, step-by-step development approach," said Mike Gold, corporate counsel for Bigelow Aerospace in Washington, D.C. "The purpose of this mission is to demonstrate and validate the core technology, such as the inflation process, as well as the durability and longevity of the vehicle when actually exposed to the on-orbit environment for a period of years," Gold told SPACE.com.

Gold said that Bigelow Aerospace and ISC Kosmotras officials have met several times. "They are responsive and they are customer oriented. It's an excellent relationship."

The two flight tests of the Genesis inflatable module are important. No information exists on how such a structure will behave once in orbit.

"Frankly, you hear a lot of talk about inflatables. People use them in PowerPoint charts...but that only takes you so far. There is no real data in regard to how an inflatable habitat is going to function in space. We expect to learn a lot from these initial Genesis launches, in regard to our basic engineering and the concept as a whole," Gold explained.

Bigelow Aerospace has also charted launches of a larger, 45-percent scale module. It is called the Guardian and will certify critical subsystems, such as life support and power generation equipment.

Two Guardian launches are being eyed for the 2007-2008 time period, Gold said. This system will be a much closer pathfinder to the full-scale module to follow.

"All four of these flights will culminate in the deployment of the first full-scale BA 330 prototype," Gold advised, with the 330 designating the cubic meters of the module's internal volume.

Earlier plans by Bigelow Aerospace called for the first Genesis test hop to ride into orbit in November of this year via a powerful Falcon 5 booster provided by Space Exploration Technologies Corporation (SpaceX). That private group is headed by chief rocketeer, Elon Musk.

However, SpaceX's takeoff of its first-version rocket, the Falcon 1, has been repeatedly delayed. The company is hopeful of pushing the button to launch Falcon 1 on a maiden flight before year's end.

"Our hopes and best wishes are with SpaceX," Gold said. "We appreciate what they are trying to accomplish, both from a technological as well as a financial perspective."

Still to be determined is the booster of choice for the Bigelow Aerospace Guardian and BA 330 expandable modules, Gold added.

The hardware for the first Genesis test voyage is coming together at the Bigelow Aerospace site in North Las Vegas, an expansive complex housed on 50-acres.

"Development is going along quite well. We are on schedule and expect to remain so," Gold noted. Buildings continue to go up at the Bigelow Aerospace corporate headquarters, he said, including the installation of command and control center facilities to be used in operating and shaking out the orbiting modules.

Bigelow Aerospace has also opened up a Houston, Texas office, not too distant from NASA's Johnson Space Center. At that location, the company's web site explains, opportunities are available for engineering and manufacturing positions in spacecraft design and development.

"We're expanding," Gold said. "One of the most difficult aspects of the aerospace field is quality people. It is difficult to identify, hire and find good engineers. The aerospace workforce is becoming a concern."

Gold said a strong corps of individuals is needed, not only for the entrepreneurial commercial sector, but also by NASA too.

The goal at Bigelow Aerospace, Gold added, is to remain small and strong. "Keep employment levels low, but keep freedom and innovation high."

One rule of the Bigelow Aerospace-backed America's Space Prize competition is that spacecraft must dock or demonstrate an ability to dock with a Bigelow Aerospace inflatable space habitat and be capable of remaining on station for at least 6 months.

"We've gotten a good response. It's definitely a challenge. We remain optimistic and hope that the prize will serve its intended purpose...to act as a catalyst to get people both thinking and moving in the direction of orbital spacecraft."

Gold said that Bigelow Aerospace has been contacted by over 30 entities, ranging from well-established groups and entrepreneurial concerns. "I've been pleasantly surprised by the credibility, seriousness, and capabilities shown by these entities."

As for how much Bigelow has invested in his private space program to date, that remains proprietary, Gold noted. "I can tell you that Bigelow has made substantial investments in terms of launch contracts, personnel and facilities. That is unprecedented...and he's doing so without a dime of government money."

Gold said that Bigelow Aerospace is appreciative of the support from NASA -- in particular the Johnson Space Center - and that the space agency is "becoming a positive force for entrepreneurial development...and we're very hopeful about the future."