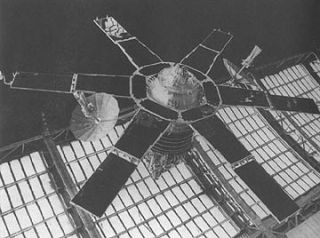 A dead Russian military satellite that circled the Earth for more than 15 years has plunged into a watery grave in the Pacific Ocean, according to Russian news reports.

According to an early analysis, the satellite's remains likely crashed somewhere in the Pacific at about 3:17 a.m. Moscow time (0017 GMT), a Russian space agency official told Ria Novosti.

The 1.6-ton Molniya 1-89 satellite was part of a fleet of communications satellites used for Russia's military services. The satellite series was replaced in 2006 by the newer Meridian-class spacecraft.

Just before its fall to Earth, the Molniya 1-89 satellite was in an orbit that reached an altitude of about 1,477 miles (2,378 kilometers), according to Russian space officials.

The death plunge of the Molniya 1-89 spacecraft is the latest of several dead satellites that have re-entered Earth's atmosphere and met fiery demises.

In March, the wayward Russian communications satellites Express-AM4 fell to Earth after spending months in the wrong orbit. The satellite's fall was lamented by one company, Polar Broadband, Ltd., which had hoped to broker a last-minute deal with Russian space officials to repurpose the satellite to aid researchers in Antarctica.

The descent of Express-AM4 followed the January re-entry of the failed Russian Mars moon probe Phobos-Grunt, as well as the 2011 crashes of NASA's Upper Atmosphere Research Satellite and Germany's X-ray space observatory ROSAT.

Unlike Express-AM4 and Phobos-Grunt, which were failed space missions, the UARS and ROSAT satellites were successful probes that had long ago accomplished their missions and were expected to destroy themselves upon re-entry.