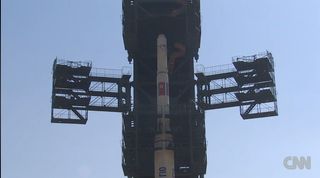 This still from a CNN broadcast shows North Korea's Unha-3 rocket, which country officials say will launch a satellite into orbit in April 2012.
(Image: © CNN)

North Korea is potentially days away from launching a controversial rocket mission that, the country says, will send a new Earth-observing satellite into orbit. Many nations, including the United States, have criticized the impending launch, which they see as a missile test in disguise.

The North Korean long-range rocket, called Unha-3 (Galaxy-3), is slated to launch sometime between April 12 and April 16, to mark the 100th anniversary of the birth of Kim Il Sung, who helped establish North Korea in 1948.

"We discussed regional security, and that obviously includes the issue of North Korea," Obama said in the March 25 news briefing in Seoul. "As President Lee mentioned, this would constitute a direct violation of Pyongyang's own commitments and its international obligations. Moreover, it would only deepen North Korea's isolation, damage further its relations with its neighbors, and seriously undermine the prospect of future negotiations."

Since the launch could occur as early as Thursday (April 12), North Korea is expected to begin fueling the Unha-3 rocket soon, according to South Korea's Yonhap News Agency.

"North Korea has only fueling remaining after completing the installation of three stages of boosters on a launch pad," a South Korean official told the Yonhap News Agency on condition of anonymity. "Fueling is expected to begin soon, considering it usually takes two to three days."

South Korean officials have said they may shoot down parts of the Unha-3 rocket if they breach the state's borders.

According to a translation of the North Korean newspaper Rodong Sinmun, a spokesman for the Committee for the Peaceful Reunification of Korea said that intercepting the satellite will be regarded as an act of war and could carry tremendous consequences.

North Korea's new leader Kim Jong Un recently entered into an agreement with the U.S. to halt long-range launches in exchange for food to curb the country's widespread famine. Obama has said that if North Korea proceeds with the launch, it could jeopardize the food aid agreement.

In April 2009, North Korea attempted a similar satellite launch that was widely criticized. North Korean officials said the mission succeeded, but U.S. intelligence agencies claimed the vehicle failed during ascent, which caused the rocket's second and third stages and the onboard satellite to plummet into the Pacific Ocean.

The 2009 event triggered the United Nations to tighten sanctions against North Korea.