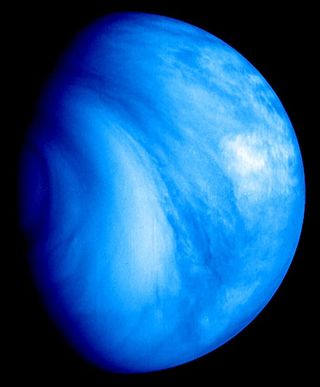 Venus' southern hemisphere, as seen in the ultraviolet.
(Image: © ESA)

The same magnetic phenomenon that causes auroras on Earth has now surprisingly been discovered creating giant magnetic bubbles around Venus, a planet without a magnetic field.

These findings could help explain mysterious flashes of light from Venus, in addition to the way comet tails work, researchers say.

The Northern and Southern Lights on Earth are caused by magnetic lines of force breaking and connecting with each other. This process, known as magnetic reconnection, can explosively convert magnetic energy to heat and kinetic energy.

Scientists had seen magnetic reconnection with planets only when they had intrinsic magnetic fields, such as Earth, Mercury, Jupiter and Saturn. These magnetic fields deflect charged particles in the solar wind streaming from the sun into a shell surrounding the planet known as a magnetosphere. Magnetic reconnection can occur within magnetospheres, leading to auroras and magnetic storms. [Photos: Northern Lights of February 2012]

"The plasma dynamics of Venus and Earth are surprisingly similar, despite their very different magnetic environments, with and without intrinsic magnetic fields," said study lead author Tielong Zhang a planetary scientist at the Space Research Institute of the Austrian Academy of Science and principal investigator of the Venus Express magnetometer.

"For many decades, dim flashes of light have been observed by various means, and were interpreted as auroras," Zhang told SPACE.com. "However, the cause of Venus' auroras has puzzled people for a long time, since Venus has no intrinsic magnetic field."

Now that mystery may be closer to being solved.

"Can one interpret the Venus nightside dim flashes as auroras?" Zhang said. "I believe our finding that magnetic reconnection occurs in the magnetotail would favor the aurora explanation."

In addition, these findings could shed light on comets, which, like Venus, are not magnetic. The way that magnetic reconnection led a magnetic bubble to detach from the magnetotail of Venus could help explain why comet tails can disconnect from comet heads, Zhang said.

The scientists detailed their findings online April 5 in the journal Science.