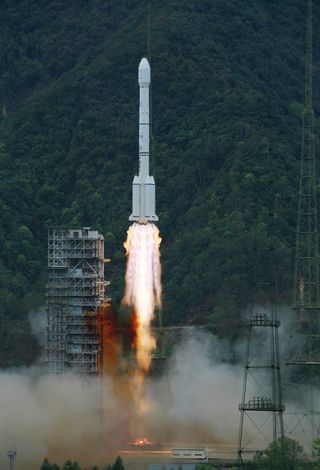 PARIS — APT Satellite Holdings of Hong Kong on April 1 said its Apstar 7 telecommunications satellite, launched March 31 aboard a Chinese Long March 3B rocket, was healthy in orbit and in the coming weeks would replace the retiring Apstar 2R spacecraft at 76.5 degrees east.

Built by Thales Alenia Space of France and Italy and carrying 28 C-band and 28 Ku-band transponders, Apstar 7’s successful launch and in-orbit checkout will mean that APT will transfer ownership of Apstar 7B, still in construction, to China Satcom.

APT and the state-owned China Satcom of Beijing had agreed in 2010 that China Satcom would arrange up to 100 million euros ($132 million) in financing for Apstar 7B and would add the satellite to its own fleet unless Apstar 7 failed at launch or otherwise was not functioning in orbit.

Thales Alenia Space built Apstar 7 under a 128.5-million-euro contract. Apstar 7B, which is a nearly identical copy using the same Spacebus 4000 C2 satellite frame, was subject to a separate construction contract valued at 112.3 million euros, according to APT.

APT will be transferring customers from Apstar 2R to Apstar 7. APT President Cheng Guangren said in an April 1 statement that the company has been "actively promoting its Apstar 2R replacement program to the market and the feedback so far has been excellent."

Apstar 7's Ku-band transponders will include beams dedicated to China, the Middle East, North Africa, sub-Saharan Africa and a steerable beam. APT hopes to use this new capacity to grow its revenue in 2012.