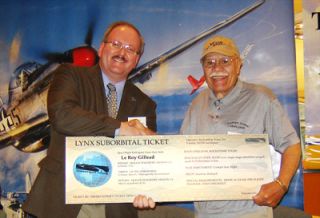 Le Roy Gillead (right), one of the 401 original Tuskegee Airmen who helped integrate the U.S. military, was awarded a free ride to suborbital space aboard XCOR Aerospace's Lynx vehicle in 2009. He hopes to blast off in 2013.
(Image: © XCOR Aerospace)

Le Roy Gillead is already an aerospace pioneer, but he'll be making another trailblazing voyage soon.

In February 2009, commercial company XCOR Aerospace announced that it had awarded Gillead a free trip to suborbital space on its two-seat Lynx vehicle.

Gillead was one of the 401 original Tuskegee Airmen — the famed group of African-American pilots, navigators, bombardiers and support staff who helped integrate the U.S. military during World War II. XCOR gave Gillead the first free ticket under the company's "Legacy Flights" program, which recognizes the contributions made by aviation and aerospace pioneers over the years.

SPACE.com caught up with Gillead in late February during the 2012 Next-Generation Suborbital Researchers Conference in Palo Alto, Calif. Gillead, who will turn 92 in June, discussed his time as an airman, the outlook for his flight and how a leg injury he recently suffered may affect his spaceflight experience.

SPACE.com: When do you think you're going take your free suborbital spaceflight?

Gillead: Next year. Late summer, or early in the autumn.

SPACE.com: Is that just a guess, or is that an official launch date?

I don't know. There are obviously things which can accelerate things, and things which can delay. And because of economic reasons, it's been delayed a year. And so it'll be in 2013, past mid-year. And I can appreciate the economic situation. People are not as ready to give when it's a depression, or a depressed economy.

SPACE.com: How did you become a Tuskegee Airman?

When the Army Air Corps was going to include blacks, it made its announcement in January 1941 and activated the 99th Pursuit Squadron on March 22, 1941. And that began the introduction of blacks into military aviation. [10 Military Aircraft That Never Made it Past the Test Phase]

I was one of the 401 original Tuskegee Airmen of the 99th Pursuit Squadron, spring of 1941, pre-Pearl Harbor. That is a senior military group of Tuskegee Airmen; no one exceeds us.

My technical training was as an airplane mechanic. That's where I started. Then I went to pilot training and washed out. Then I went to navigation and bomber training, and then aerial gunner, and was assigned as a navigator-bomber in the 477th Bombardment Group in June of 1944.

It's so important for this bit of American history that the public begin to learn more about contributions non-whites have contributed to America — and particularly blacks, which is the longest as far as that goes.

SPACE.com: Would it have seemed crazy to you back then, to think you could go to space someday?

Did anybody think of going to Mars? The racism in the country, and what was going on — that doesn't even enter into it.

Nobody was thinking about that. We were just coming out of the Depression, and the euphoria that was going on at the time — everybody was just feeling better because things were improving. So when the war started, everybody was getting better jobs, so everybody was in a very good mood. Notwithstanding getting ready to go to war (laughs). [Top 10 Private Spaceships Headed for Reality]

SPACE.com: So here you are, getting ready to go to space in a year or so. What are you most looking forward to about the experience?

Let me put it this way. It's like anything — once you get the bug, you enjoy it. You can't go back. So anything new in aviation is interesting to me. So to be selected to go on a legacy flight with XCOR on its Lynx is a once-in-a-lifetime opportunity. And the Tuskegee Airmen Incorporated have selected me to represent them in this endeavor. That's great for my heritage.

SPACE.com: Why do you think they chose you?

Well, you can see I walk slow now, but just as you said — you said I didn't look my age, act my age, move like my age. And most of my contemporaries are not as mobile as I am. And I had this accident after I was chosen. It's not an inhibiting factor, but it highlights my age, the way I move around here.

SPACE.com: Do you have any concerns about the stresses of the flight — the G-forces or anything like that?

No. It's no big thing (laughs). The biggest thing to me is how high I'll have to stretch my leg to get up or get in. I don't know how easy it is to get in; that's the biggest thing.

SPACE.com: What do you think will be going through your head when you look down at the Earth for the first time from space?

No, I want to look up first, because I want to see night and day simultaneously. That's the most important thing, OK? You don't get to see that, except in the movies. And then you glide down, and the whole flight takes, from the time you start off until landing, about 30 minutes.

SPACE.com: Do you know what your training's going to be like? What are you going to have to do to get ready?

I've seen some things, but I don't know exactly. But that'll work itself out. Within six months or so, I should begin to hear something about it.

The people who are putting up their money to take these flights, I don't know how I will participate in relation to them. But I don't see what there is to do. I mean, I don't see the difference between that and a regular plane, except that you're going faster. [Photos: The First Space Tourists]

I'm assured no parachute, so what's all the other stuff for? (laughs)

SPACE.com: Do you hope flights like yours will inspire kids — African-American kids in particular — and help get them interested in science and math?

You just have to keep the environment that'll raise their curiosity. It's known among educators that self-education's the easiest way — mimicking. You just have to keep the environment. They'll do it. When a baby is born, all these gimmicks they put on the little crib and whatever, it's to stimulate their minds. And therefore the characters that we as human beings develop — let's say at 10, 12 whatever it is — develop faster in the current generation than in my generation, because they're stimulated.

SPACE.com: Anything else you'd like to say about the flight?

I've just got to be patient and wait. Hopefully I don't pass before the flight comes, you know (laughs).

SPACE.com: It looks like you're doing pretty well to me.

All my life I had no accidents until this. And who knows what could happen? I walk out there, who knows, an earthquake — I live in San Francisco. Anything can happen.

SPACE.com: Are you going to view the world any differently when you get back? Do you think the flight is going to change your outlook on life?

I probably won't see more than one to two continents; depends how, and on what angle I see that. I already have seen it on TV, but I'll actually see it now. You know the Great Lakes? I've seen them all at one time. They looked like ponds. That's the only thing that'll happen to me. But I can't do anything other than just say, I saw that.

Now, other people will have to wait until they go to heaven. I don't have to do that (laughs).