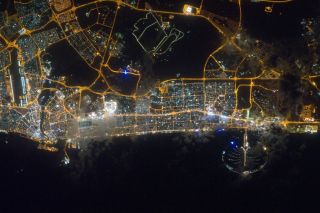 The city lights of Dubai, in the United Arab Emirates, shine in this photo taken from the International Space Station on Feb. 22, 2012.
(Image: © NASA)

A bustling metropolis in the heart of the United Arab Emirates lights up the night in this photo taken by an astronaut aboard the International Space Station.

The city of Dubai is the largest metropolitan area in the emirate of the same name. The region's uniquely shaped island developments, framed by a bright lattice of orange lights, are clearly visible in this nighttime image taken from space on Feb. 22.

Dubai is a popular photographic target for astronauts aboard the International Space Station because of the artificial archipelagos located just offshore in the Persian Gulf, NASA officials said in a statement. These attention-grabbing features were intentionally built so that the full design is only visible from a vantage point looking straight down, such as an airplane or an orbiting outpost in space.

The cluster of lights at the bottom right is the Palm Jumeira complex, which is still under development. The palm tree-shaped artificial archipelago consists of a crescent breakwater surrounding a trunk and 16 fronds.

Flying 240 miles (386 kilometers) above the Earth's surface, the astronauts aboard the space station can fully appreciate Dubai's dazzling city lights, and the area's vivid pattern of urban design.

Several striking patterns can be made out in the detailed image, such as how the highways and major streets are lined with sharp yellow-orange lights, while the commercial and residential areas appear more speckled with blue, white and orange lights.

The large, brightly lit spots are some of Dubai's big hotels and shopping malls, including the world's tallest building, the Burj Khalifa Tower, which looms at an impressive 2,717 feet (828 meters).

The stunning city lights contrast sharply with the dark Persian Gulf to the northwest and the more undeveloped and unlit areas to the southeast. The sporadic blurry patches of gray are clouds.

The photo was taken with a long focal-length lens and a digital camera that is highly sensitive to light, NASA officials said.