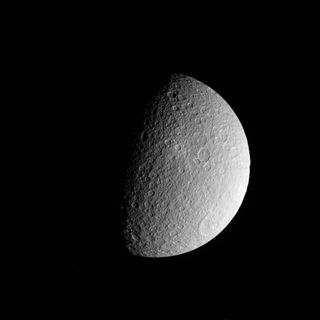 Saturn's battered, icy moon Rhea comes into sharper focus in a new set of snapshots from a robotic NASA probe.

NASA's Cassini spacecraft snapped the raw, unprocessed pictures on March 10 while making a flyby of Rhea with a closest approach of about 26,000 miles (42,000 kilometers). During the flyby, Cassini snapped three different views of the moon's cratered surface, creating a mosaic of Rhea's leading hemisphere and the side of the moon that faces away from Saturn, researchers said.

Cassini's observations captured several huge impact basins, including one known as Mamaldi that's 300 miles (480 km) across and another, called Tirawa, that is 220 miles (360 km) wide.

Rhea is Saturn's second-largest moon, with a diameter of 949 miles (1528 km). It's far smaller than the ringed planet's largest natural satellite, Titan, which at 3,200 miles (5,150 km) across is nearly 50 percent wider than Earth's moon.

As the new photos show, Rhea's icy surface is battered and pocked with many craters, the scars of innumerable impacts over the eons.

In 2010, scientists learned that Rhea has an atmosphere dominated by oxygen and carbon dioxide. This atmosphere is incredibly tenuous and wispy, nothing like the thick blanket of air we're used to on Earth.

Researchers think the oxygen comes from Rhea's surface ice, liberated from water molecules that get blasted apart by charged particles streaming from Saturn's magnetosphere. The source of the carbon dioxide, however, is more mysterious.

Rhea was discovered in 1672 by the mathematician and astronomer Giovanni Domenico Cassini. The moon takes its name from the Titan Rhea, known as the "mother of the gods" in Greek mythology.