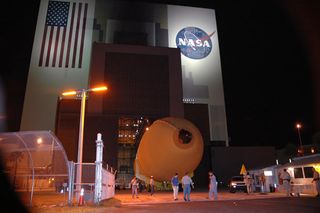 Just before dawn, External Tank 119 (ET-119) rolls out of the Vehicle Assembly Building at NASA's Kennedy Space Center to be shipped back to its Michoud Assembly Facility in New Orleans, Lousiana.
(Image: © NASA/KSC.)

A shuttle external tankbegan a voyage today from Kennedy Space Center back to the manufacturing plantin Louisiana as part of the investigation into why Discovery's fuel tank lostfoam during its trip into space.

The orange tank was loaded onto a covered barge for the water trip to theMichoud Assembly Facility in New Orleans.

Officials said it might be used as a test bed and might eventually be modifiedto be used as the tank for Discovery's mission tentatively set for March2006.

The tank - called ET-119 - was originally set to fly into space on the thirdreturn-to-flight mission following the 2003 Columbia accident.

Five oversized pieces of insulating foam felloff Discovery's external fuel tank July 26, during the first shuttle launch totest safety reforms made in the wake of the Columbia disaster. NASA needsseveral months to study and then fix the fuel tanks it has on hand.