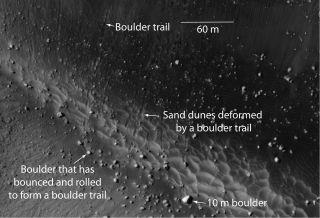 Scientists have found evidence of relatively recent quakes on the surface of Mars by studying boulders that fell off cliffs, leaving tracks behind.
(Image: © NASA/HiRISE image)

The surface of Mars appears to have been shaken by quakes relatively recently, hinting at the existence of active volcanoes and perhaps reservoirs of liquid water on the Red Planet, a new study suggests.

Using photographs snapped by NASA's Mars Reconnaissance Orbiter, researchers analyzed the tracks made by boulders that fell from a Martian cliff. The number and size of these boulders — which ranged from 6.5 to 65 feet (2 to 20 meters) in diameter — decreased over a radius of 62 miles (100 kilometers) from a point along Mars' Cerberus Fossae faults.

"This is consistent with the hypothesis that boulders had been mobilized by ground-shaking, and that the severity of the ground-shaking decreased away from the epicenters of marsquakes," the study's lead author Gerald Roberts, of the University of London, said in a statement.

The dirt patterns created by the toppled Martian rocks weren't consistent with how boulders would scatter if they were deposited by melting ice, researchers said. Rather, they resembled the boulder falls seen after a 2009 earthquake near L'Aquila, in central Italy.

Based on the area covered by the displaced rocks, Roberts and his team estimate the quake's magnitude at 7 — about the same as the 2010 Haitian temblor that killed perhaps 300,000 people. The marsquake may have been powered by movements of magma related to the nearby Elysium Mons volcano, the researchers added.

Because Martian winds have not yet erased the boulder tracks, the researchers further concluded that the quake occurred in the relatively recent past, within the last few percent of the Red Planet's 4.5-billion-year history.

There's even a possibility that quakes are shaking the Martian surface today, they added. If that's the case, it would be good news for scientists interested in searching for life on the Red Planet. If active volcanos still exist on Mars, their heat could melt pockets of the planet's subterranean ice, perhaps forming reservoirs of liquid water hospitable to life as we know it.

The study will be published in the March 1 edition of the Journal of Geophysical Research-Planets.