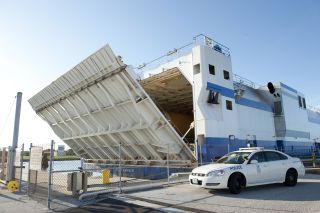 A ship ferrying an Atlas 5 booster and other rocket parts to their Florida launch site crashed into a Kentucky bridge late Thursday (Jan. 26), but the flight hardware appears to be undamaged, officials say.

The 312-foot (95-meter) cargo ship Delta Mariner smashed into a bridge over the Tennessee River in southwest Kentucky at 9:15 p.m. EST Thursday (0215 GMT Friday), causing a portion of the span to collapse. Though several cars were crossing the bridge at the time, the accident caused no injuries.

The Delta Mariner was carrying one Atlas 5 rocket and several other components from the United Launch Alliance (ULA) factory in Decatur, Ala., to Cape Canaveral, Fla. The flight hardware will be used for two upcoming launches from the Cape, including one slated to blast off April 27.

"The 312-foot vessel was carrying an Atlas booster and Centaur upper stage for the Air Force's Advanced Extremely High Frequency (AEHF-2) mission scheduled to launch in April, and an interstage adapter for NASA's Radiation Belt Storm Probes (RBSP) mission scheduled to launch in August," ULA officials said in a statement Friday. "There is no schedule impact to either launch date expected at this point."

The rocket parts seem to have survived the accident intact.

"There's no damage to the cargo," said Sam Sacco, spokesman for Foss Marine, the company that owns and operates the Delta Mariner. "Based on what we know right now, there's no real damage to the vessel itself, either."

"The hardware is well instrumented, and all data from these instruments is being reviewed to confirm that there were no issues," they said.

The Delta Mariner, which was commissioned in 2002, transports flight hardware from ULA's Decatur factory to Cape Canaveral and another launch site, California's Vandenberg Air Force Base. It's capable of carrying up to three common booster cores, which are each as long as a 737 jet's fuselage.

The ship can ply both rivers and the open ocean, and it can navigate waterways as shallow as 9 feet (3 m), according to ULA officials. The trip to Cape Canaveral covers about 2,100 miles (3,380 kilometers) and takes eight to 10 days.

Sacco said the cause of the accident — which apparently did not result in any fuel spills or other obvious environmental problems — remains a mystery for now.

"The company's been doing it for over 10 years. Exactly why this happened, I can't tell you," Sacco told SPACE.com. "The Coast Guard will lead an investigation into the cause, and that will be the definitive explanation as to what happened."

The Atlas 5 rocket is an expendable booster that first launched in 2002. Since then, it has logged about two dozen liftoffs, with 100 percent mission success, according to ULA officials. NASA's Curiosity Mars rover blasted off atop an Atlas 5 this past November.