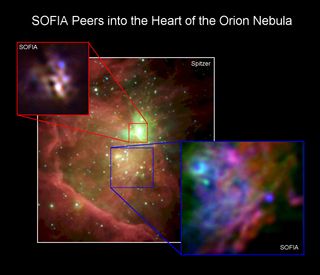 This image compares two infrared pictures of the heart of the Orion nebula captured by the FORCAST camera on the SOFIA airborne observatory's telescope with a wider image of the same area from NASA's Spitzer space telescope.
(Image: © SOFIA image: James De Buizer/NASA/DLR/USRA/DSI/FORCAST; Spitzer image: NASA/JPL)

A NASA telescope mounted in a modified Boeing 747SP jet has peered deep into the heart of a nebula where stars are being born.

NASA's Stratospheric Observatory for Infrared Astronomy, or SOFIA, snapped two photos of a star-forming region of the Orion nebula, which is also known as M42. The infrared images, taken this past summer, show a complex distribution of stars and interstellar dust.

In one photo — outlined by the red box — a single blue source shines especially brightly. This dot is a gigantic protostar known as the BN (Becklin-Neugebauer) Object. The blue, green and red colors in the image represent light with wavelengths of 20, 31, and 37 microns, respectively, which comes mainly from relatively cool interstellar dust, researchers said.

In the blue-bordered image, blue, green and red denote infrared light with wavelengths of 8, 20, and 37 microns, which is coming from material as warm as 450 degrees Fahrenheit (232 degrees Celsius), researchers said.

The large background image is a composite of data gathered by NASA's Spitzer space telescope, which is also optimized to scan the heavens in the infrared. Together, the SOFIA and Spitzer pictures provide a comprehensive view of many stages of star formation, from cold interstellar clouds to bona fide stars, researchers said.

The SOFIA airborne observatory incorporates a 17-ton reflecting telescope with an effective diameter of 8.3 feet (2.5 meters). The SOFIA aircraft flies as high as 45,000 feet (13,700 m), high enough to get above more than 99 percent of the atmosphere's infrared-blocking water vapor.