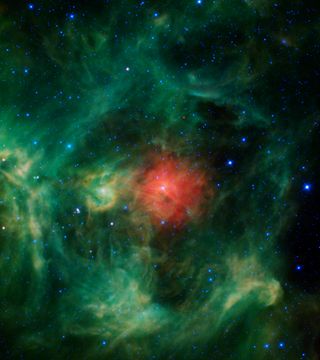 In this image, captured by NASA's WISE space telescope, the star-forming nebula Barnard 3 looks like a Christmas wreath. Baby stars are being born throughout the dusty region, while the "silver bell" stars are located both in front of, and behind, the nebula.
(Image: © NASA/JPL-Caltech/UCLA)

NASA spacecraft are beaming home some festive photographic treats, just in time for the holidays.

One shot, taken by NASA's Wide-field Infrared Survey Explorer (WISE), captures a star-forming nebula that resembles a Christmas wreath. If you squint a little, the nebula's red dust cloud could be a bow, and the bluish-white stars look like silver bells.

The nebula is called Barnard 3, and it's found in the Perseus constellation. The star in the center of the red cloud, known as HD 278942, is so bright that it's lighting up most of the surrounding clouds. The red cloud is probably composed of dust that's cooler and more metallic than the material in surrounding regions, researchers said.

The different colors in the WISE image represent different wavelengths of infrared light. Blue and blue-green represent wavelengths of 3.4 and 4.6 microns, both of which come chiefly from stars. Green and red denote light from 12 and 22 microns, respectively, which are mostly emitted by dust, researchers said. [See the space Christmas photos]

WISE launched in December 2009 on a mission to survey the sky in infrared light. The telescope shut down in February of this year, after taking about 1.8 million images of cosmic objects and discovering more than 33,000 new asteroids. Researchers are still sifting through the huge amounts of data WISE collected during its observational life.

The natural-color photos depict Titan, Saturn's largest satellite. In each of them, a second, icy moon — Dione in one case, Tethys in the other — is visible in the distance behind the haze-enshrouded Titan.

While Earth's northern hemisphere is just now shifting into winter, it's currently northern spring in the Saturn system and will remain so for several years. Northern summer is due to arrive in 2017, and Cassini should be around to see the seasons change. NASA has extended the mission of the spacecraft, which launched in 1997 and arrived at Saturn in 2004, through 2017.

"As another year traveling this magnificent sector of our solar system draws to a close, all of us on Cassini wish all of you a very happy and peaceful holiday season," Carolyn Porco, Cassini imaging team lead at the Space Science Institute in Boulder, Colo., said in a statement.