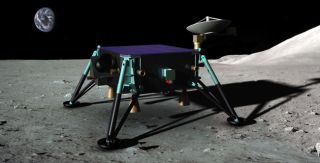 Artist's interpretation of the Draper/MIT team's hopping spacecraft on the moon, for the Google Lunar X Prize.
(Image: © Draper/MIT)

Though a new, hopping spacecraft was designed with a Mars mission in mind, its creators plan to send it on a test voyage to the moon first — and possibly snag a big prize in the process.

The spacecraft, built by scientists at MIT and Draper Laboratory in Cambridge, Mass., will compete for the Google Lunar X Prize, most of which goes to the first team that sends a privately funded spacecraft to the moon. Up for grabs is a $20 million purse and major bragging rights. [Photo of the private moon and mars hopper]

Exploring the surface of the moon or Mars isn’t anything new; unmanned, wheeled rovers have been doing it for decades. But these vehicles have limits — they can’t crawl inside craters, scale cliffs or travel long distances. NASA’s Spirit and Opportunity rovers, for example, have logged just around 20 miles since landing on Mars in 2004. These rovers aren’t exactly speed demons; Opportunity maxes out at 0.1 mph.

Enter the Draper/MIT hopper. Draper and MIT are both members of the Next Giant Leap consortium that is working to secure funding for a moon mission.

“Draper has a long history of helping NASA land things on other planets," said Seamus Touhy, Draper’s director of space systems. “They all ended up being things that landed and stayed. If you wanted to explore, you landed a rover.”

But most rovers can only examine their immediate neighborhood – and that takes time. If you want to explore faster and on a more expansive scale, a spacecraft must be able to land, take off again and land somewhere else, he said.

The MIT/Draper solution is a new type of robotic explorer that can hop over obstacles, rather than inch along a planetary surface.  Hopping, they believe, will make it easier for an explorer to navigate rugged terrain, travel greater distances and gather more data. The MIT/Draper hopper can travel three to six  miles (5 to 10 km) per hop and cover a total of 25 miles (40 km) in a few hours.

The prototype hopper, which would be launched atop a rocket from Earth, is about the size of a good-sized coffee table, about 3 feet by 4 feet, Touhy said, and has an all-composite frame. Because it is designed to operate in low-gravity environments, it gets around using a cold-gas propulsion system that pulses jets of gas through thrusters underneath the vehicle.

"All you hear is the pop-pop-pop of gas," Touhy told SPACE.com.

For testing on Earth, the smaller prototype of a hopper that would be used in space has four electric, downward-pointing ducted fan engines that provide lift to counter the vehicle’s weight and simulate a low-gravity environment.

But the hopper is not like a pogo stick, Touhy said. It ascends and lands more smoothly, like a helicopter.

All the prototype systems, including the cold-gas system, have been tested, though just with up and down movement so far.  Free-flight tests of the entire system with unconstrained motion are scheduled to begin early next year.

Draper is the lead systems engineer and developer of the guidance, navigation, control and avionics systems; MIT is building the test bed structure and propulsion system.

Beyond roaming the surface of the moon, the spacecraft could help open up other frontiers in space, such as the Red Planet or a nearby asteroid, the scientists say.

"It could be used on asteroids where you couldn’t use a rover because it’s such a reduced gravity environment," Touhy said. "We’re at a similar point where we were pre-Apollo. You always learn a lot more by touching down."