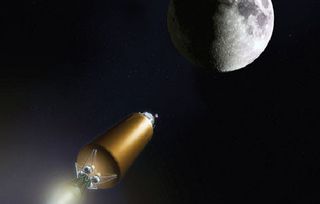 A former Google Lunar X Prize team is now aiming to enable anyone to launch a rocket to the moon for $5,000.
(Image: © Lunar Robotics)

When father-and-son backyard experiments have reached the point of sending smartphones up on weather balloons to snap pictures at the edge of space, DIY space enthusiasts will want to take things up a notch. A crowd-funded project to create a $5,000-moon-rocket kit just may do the trick.

The idea comes from Lunar Robotics, a private team formerly competing to land a robot on the moon in the $30-million Google Lunar X Prize. It has already conducted several tests based on an old U.S. Air Force concept of launching rockets from high in the sky aboard weather balloons — called rockoons — to save on fuel costs. But after its financial backer had to pull out, the team turned to the public through the crowd-funding website Kickstarter.

"If I go to a private person, they're going to turn it into a commercial product, and that's fine," said Philip Pierce, a software engineer with Lunar Robotics. "But I want an open project so that anyone can modify it and use it. Who knows, maybe someone can scale it down to $3,000."

The team is looking for $25,000 through Kickstarter to test out its rocket idea by launching about one rocket per month between now and December 2012. If it proves successful, it can begin offering the $5,000-moon-rocket kits that would allow anyone to launch a 4-to-6-foot rocket to the moon carrying any 3-lb. payload.

That development cost is considerably cheaper than the $250,000 Lunar Robotics was originally counting on for its Google Lunar X Prize bid, because the team no longer has to worry about contest rules such as having a big-enough rocket to land a robot on the lunar surface. Still, it wants to prove the concept works before selling any kits.

"Part of the testing is that we have to send something to the moon to show that it's possible," Pierce told InnovationNewsDaily. "But we also have to test different fuels and make sure components work in space with temperature extremes and radiation."

The team's favorite rocket fuel so far is an off-the-shelf fuel used by large hobbyist rockets — a mixture of ammonium dinitramide with a binder of glycidyl azide polymer. That combination gives the fuel its own oxidizer to keep the rocket burning even without oxygen in space, and the fuel's solid state means the rocket can avoid the greater explosive dangers of liquid fuels.

Launching the rocket into space from its balloon is expected to be as easy as "fire and forget," but a simple ham radio aboard the rocket could beam telemetry data back to the human user on the ground. True to the DIY spirit, the team also plans to use mostly commercially available parts for building the rocket.

"Ideally, the goal is for everything to be off-the-shelf or as close to off-the-shelf as possible," Pierce explained. "Anything that's not could be manufactured with a 3D printer or CNC machine."

Time has begun running out for the Kickstarter project's goal of reaching $25,000 by Dec. 14. But even if the crowd-funding approach falls through, Pierce and his fellow engineers hope to find some sort of new private funding so the DIY kit can appear on future holiday wish lists.