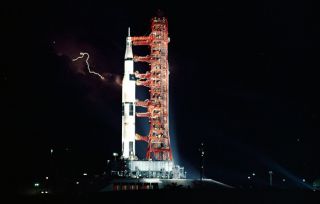 Lightning flashes in the sky behind the Saturn V rocket that will propel Apollo 15 to the moon, July 25, 1971
(Image: © NASA)

NASA's better days can appear long past to the public. The U.S. space agency that once landed a man on the moon now wrestles with questions of existential crisis after retiring its space shuttle fleet this year. But it may still have enough leftover mojo to boldly set new goals to go where no man has gone before — if it can shake off its instinct to always look for guidance from the president and Congress.

A chance exists for NASA to declare a new vision for space exploration, said Jeff Leitner, founder and dean of Insight Labs. His nonprofit group wants to help the space agency control its destiny based on the authority of its "smartest, badass scientists" and spaceflight achievements, rather than acting as a political football for lawmakers while waiting for someone to decide its next mission.

"If they were in Silicon Valley, we'd be worshiping them," said Jeff Leitner, founder and dean of Insight Labs. "But they're NASA, so we're cutting their budget."

Part of the uncertainty problem surrounding space exploration is that "the public narrative around NASA seems broken," Leitner explained. Even as news reports glowed over fantastical visions of possible new technologies from the secretive Google X lab in November, NASA was carefully preparing to launch its nuclear-powered Curiosity rover — the size of a Mini Cooper — to explore the possibility of life on Mars.

The other part of the problem may come from NASA's blindness to its own "cool" factor. That realization came to Leitner during a 3-hour Friday-morning talk among NASA representatives and big thinkers from all walks of life at NASA Langley Research Center in Virginia on Nov. 18.

"We got there by having people in [the] room who are experts in science and technology say [to the NASA representatives], 'You know we're looking to you for that guidance on space exploration," and watch NASA be surprised by their own credibility," Leitner told InnovationNewsDaily.

NASA's blindness to its brand's coolness became more evident as the discussion wore on. Leitner and his Insight Lab colleagues posed a hypothetical to the NASA representatives: If they summoned Larry Page, Google cofounder, and Mark Zuckerberg, Facebook founder, to a meeting, would the Silicon Valley VIPs attend?

The NASA representatives said they didn't know. "Of course [they'd come], you're NASA!" Leitner and his colleagues responded.

NASA's chance to take a new leadership role arises in a time when new countries and private spaceflight companies alike have begun crowding into an area once dominated by the United States and the former Soviet Union. That "fragmented environment" gives a chance for NASA to possibly become both architect and chief builder for space exploration.

"Somebody has to be the architect; NASA has earned that role," Leitner said. "We were in the building where Orville Wright had his office. If you're that guy, you get to declare the nation's priorities for flight."

By setting its own grand strategy, NASA could better hold a steady course despite new presidential administrations or changing budgets. That would buck the trend of allowing Congressionally-approved budgets to decide spaceflight missions and goals.

"NASA has an opportunity that they didn't know they had," Leitner explained."They currently judge their value in the world based on budgetary guidelines; that doesn't quite resonate with public perception or narrative."

Insight Labs organized its "Reclaiming Public Fascination" meeting with the goal of sparking a conversation among outside thinkers about changing NASA's public narrative and message. Such a target seemed more achievable in a 3-hour meeting than changing the mission of NASA or figuring out a new direction for technological breakthroughs.

But Insight Labs also aims to do much more than simply provide standard consulting advice to organizations for free. It aims to help tackle the big problems that keep the heads of government agencies and nonprofits up at night.

"A lot of people say, 'Here's how you can reorganize yourself to be more efficient,' but a lot of big-name organizations are solving the wrong problem," Leitner said. "We go way up the headwaters of the problem."

The Insight Labs founders have already begun more in-depth interviews with some of the thinkers who attended the meeting, and continue to talk with NASA about making slight changes to past assumptions to make the path forward easier. In one email, Leitner told a NASA contact that the space agency was still "planning for gravity in a zero-gee environment." Why not float free?