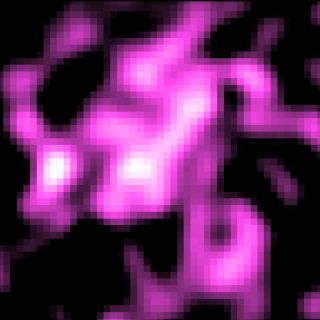 Gamma-ray emission detected by NASA's Fermi space telescope fills bubbles of hot gas created by the most massive stars in a region of the constellation Cygnus known as Cygnus X. The turbulence and shock waves produced by these stars make it more difficult for high-energy cosmic rays to traverse the region. When the particles strike gas nuclei or photons of starlight, gamma rays result.
(Image: © NASA/DOE/Fermi LAT Collaboration/I. A. Grenier and L. Tibaldo )

The bubbles are located about 4,500 light-years away, in a star-forming region of the constellation Cygnus (the Swan) that astronomers have dubbed Cygnus X. Cygnus X hosts hundreds of huge stars, whose powerful radiation has cleared out vast amounts of gas from the neighborhood.

The massive stars thus sit in bubbles filled with hot, sparse gas; these hollowed-out regions are surrounded by ridges of thicker, cooler gas where new stars are forming, researchers said.

The outflow from Cygnus X's gigantic stars also creates intense magnetic fields within the bubbles. And it is these magnetic fields that help spawn the gamma rays, by trapping and deflecting fast-moving particles called cosmic rays.

Cosmic rays are tiny, electrically charged particles that move at nearly the speed of light. They are primarily protons, and astronomers think most were probably accelerated to their incredible speeds by star explosions known as supernovas.

When cosmic rays collide with interstellar gas, they give off gamma rays. That appears to be what's happening in Cygnus X; the cosmic rays are being deflected by the bubbles' magnetic fields, then slamming into gas molecules, researchers said.

A supernova remnant may have spawned the cosmic rays found in Cygnus X's bubbles, but it's also possible that the particles were accelerated through repeated interaction with shockwaves produced within the cavities by stellar winds.

"Whether the particles further gain or lose energy inside this cocoon needs to be investigated, but its existence shows that cosmic-ray history is much more eventful than a random walk away from their sources," said Luigi Tibaldo, a physicist at Padova University and the Italian National Institute of Nuclear Physics, a co-author of a recent study investigating the bubbles.