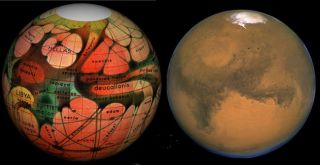 Does Mars have water?  This question has been contentious for well over a century and a half, with extreme swings in scientific opinion — from a planet crisscrossed with canals to no water at all; from trickles of briny water to a landscape as dry as a bone.

Recent missions to the Red Planet are providing information to help answer this question, but the new facts aren't flooding in like waves — they are trickling in like a coy, meandering stream, but one that is steadily growing in volume and intensity.

Debunking the "canals" of Mars

Percival Lowell (1855-1916), one of the most prominent stargazers of the early twentieth century, and builder of the Lowell observatory on Mars Hill, Arizona, had written three books claiming that he had discerned an immense network of canals through his telescope. Such a large-scale cooperative project, he was certain, could only have been conceived and executed by intelligent Martians in an effort to save their home planet from drying out.

Lowell believed that the Red Planet was once green with lush vegetation, but was now barren and desertified. Its polar ice caps, he thought, were the only remaining source of water, and the canals were a (literally) last-ditch effort to sustain the Martian civilization. [Photos: The Search for Water on Mars]

It was the brilliant and eccentric evolutionist Alfred Russel Wallace (1823-1913), Charles Darwin's junior partner in discovering the theory of natural selection, who effectively debunked Lowell's illusionary network of Martian canals.

Ever curious and intellectually and physically adventurous, Alfred Russel Wallace never allowed his specialties within natural history to keep him from poking into any and all scientific questions that interested him. In 1907, when he was 84 years old, Wallace wrote his eighteenth book, "Is Mars Habitable?" Here's what he had to say:

"The very immensity of this [imagined canal] system, and its constant growth and extension during fifteen years of persistent observations, have so completely taken possession of [Lowell's] mind, that…he has declared them to be "non-natural,"…therefore to necessitate the presence of highly intelligent beings who have designed and constructed them…The innumerable difficulties which [his conclusion] raises have either been ignored, or brushed aside on the flimsiest evidence. [He] never even discussed the totally inadequate water-supply for such world-wide irrigation, or the extreme irrationality of constructing so vast a canal-system the waste from which, by evaporation, when exposed to such desert conditions as he himself describes, would use up ten times the probable supply…[It would show] complete ignorance and stupidity in these alleged very superior beings."

Six decades later, it was hoped that advances in technology would finally settle the question of water on Mars.

When scientists search for life on a distant and unexplored world, the first rule is, "Follow the water!" Indeed, all the long-continued interest in water on Mars is, of course, part of the indirect search for extraterrestrial life. As far as our own experience goes, life can survive only in proximity to water.

In 1971, the Mariner 9 photographed almost the entire surface of Mars at close range; there were no canals, but the photos did reveal what look like dry riverbeds and alluvial channels formed by water (or at least liquid) in the past.  The Mariner flights of fifty years ago were unable to demonstrate whether Martian water exists or not, but the bleak craters and seemingly parched landscape were thought to be extremely hostile to supporting any kind of life.

Today, new evidence is making it seem increasingly likely that Mars did indeed once contain lots of water — and may still have vast quantities underground. Recently released photos from NASA's High Resolution Imaging Science Experiment (HIRISE) instrument on the Mars Reconnaissance Orbiter have hinted at the presence of water on the Red Planet. Dark, finger-like features that appear and extend down some Martian slopes during the warmest months of the year may show activity of salty water. They fade in the winter, and then recur the next spring.  But so far there is no evidence of any life on the planet, simple or complex.

In 2004, the Mars rover Opportunity's Mössbauer spectrometer showed that some rocks contain the mineral jarosite, which is also found here on Earth.  This hydrous sulfate of potassium and iron seems to be strewn over an alkaline Martian plain where sulfates and clays are plentiful.   What's so interesting about jarosite?  Scientists have concluded that it can only form in the presence of water, but requires dry conditions for its preservation.

University of Syracuse mineralogists, led by Suzanne Baldwin and Joseph Kula, have been able to determine the age of jarosites here on Earth and the surface conditions under which they were formed. If and when they can ever get a sample of the Martian jarosite, their newly developed tests may tell us when, where, and under what conditions water was plentiful there. Their method utilizes trapped argon gas isotopes within the minerals that can serve as chronological markers of how long ago the rock was formed.

Contrary to the initial results of the Viking mission of 1976, which suggested acidic soil, the recent Phoenix lander measured the pH of the soil to be alkaline, with a pH between 8 and 9.  The principal investigator for Phoenix, Peter Smith, noted that the pH of Mars soil is similar to that of seawater on Earth.  The Phoenix lander also sent back unequivocal evidence of near-surface water ice.  In the November 2011 Scientific American, Smith wrote, "With more water…the soil could grow asparagus."

Later this month, NASA will launch the Mars Science Laboratory, hoping to follow up on the discovery that short-lived, seasonally-varying plumes of methane gas issue from underground sources at three specific regions. One of the most intriguing is at Nili Fossae, a large eroded fracture in the Martian surface that is partially filled by sediments. Its methane clouds could be produced by underground microbial life there, or by geothermal processes.

On Earth, methane often is a metabolic by-product of living organisms, including microbes.  And now, with strong evidence for water existing on Mars, some scientists have become increasingly optimistic that the planet may indeed support some forms of life. "All in all," in Smith's current view, "the chances of finding life on Mars have never seemed better."