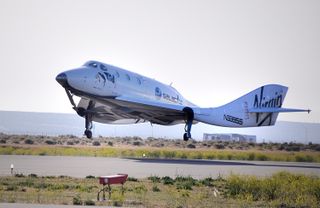 SpaceShipTwo makes a May 4, 2011 landing on Runway 30 at the Mojave Air and Space Port in California. Touch down signaled the successful end to the craft's 7th glide test and, for the first time, evaluation of its novel feather re-entry system.
(Image: © Bill Deaver/Deaver-Wiggins and Associates)

Suborbital space tourism and other private spaceship efforts have not developed as quickly as many people may have hoped or expected, but the industry now appears to be gathering some serious momentum.

Back in 2004, British billionaire Richard Branson predicted that his newly founded company, Virgin Galactic, would be flying customers to suborbital space by 2007. Virgin Galactic and other firms still have yet to launch any paying passengers, but they are poised to do so in the near future, some experts say.

"I'm very bullish on the market. We're seeing a lot of activity," said George Nield, associate administrator for commercial space transportation at the U.S. Federal Aviation Administration. "We're also seeing a real maturity in the industry itself." [Vote Now! The Best Spaceships of All Time]

"I'm seeing the likelihood that several of these companies are going to be at the point where they're testing their vehicles in the next couple of years," Nield added. "And certainly within the next five years, I expect to see regular and frequent operations."

This week, leaders of the private spaceflight industry are gathering in Las Cruces, N.M. for the seventh annual International Symposium for Personal and Commercial Spaceflight. Officials from private companies, NASA and the Federal Aviation Administration (FAA) will use the symposium to discuss the future of commercial space travel.

The age of space tourism officially began in 2001, when American entrepreneur Dennis Tito paid a reported $20 million for an orbital trip to the International Space Station in a deal with Russia's space agency that was brokered by the U.S. company Space Adventures. Since then, six other millionaires have paid for similar trips (the most recent in 2009 cost a reported $35 million).

But new, private suborbital space vehicles hold the promise of launching more than just a handful of the ultra-rich into space. Several companies are developing spaceships that could cater to thrill-seeking space tourists or scientists hoping to perform experiments during the brief minutes of weightlessness offered by suborbital spaceflights.

Branson's optimism for Virgin Galactic was spurred by the performance of SpaceShipOne, which won the $10 million Ansari X Prize in 2004 after making it to suborbital space twice in a five-day stretch.

Virgin Galactic based its future fleet of suborbital spaceliners on SpaceShipOne, which was built by California-based firm Scaled Composites. At that time, planning for Virgin Galactic to begin commercial operations in three years or so perhaps didn't seem like much of a stretch.

But spaceflight is tough, and optimistic timelines in the industry rarely work out.

"In aerospace, everything always takes longer than you think it will," said John Gedmark, executive director of the Commercial Spaceflight Federation.

Furthermore, Virgin Galactic didn't just start cranking out copies of SpaceShipOne back in 2004.

After consulting with its customers, the company decided to overhaul the spacecraft, giving the new SpaceShipTwo more windows and making it roomy enough to let six paying passengers float around the cabin a bit, officials said.

"We designed a vehicle that we think meets the sweet spot for those customers," said Virgin Galactic president and CEO George Whitesides. "But creating that vehicle was more than just tweaking SpaceShipOne. It really was creating a new vehicle."

Starting up a suborbital spaceflight operation also involves more than just designing a spaceship, Whitesides added. Virgin Galactic has had to develop a manufacturing program for SpaceShipTwo (which will officially be known as the VSS Enterprise), set up the brand-new Spaceport America in New Mexico, and map out the details of its customers' spaceflight experience. [Photos: Spaceport America Takes Shape]

"We really do aspire to build the world's first commercial spaceline," Whitesides told SPACE.com. "And to us, that means a lot more than just having a vehicle. It means really building out an experience, and the start of an industry."

Virgin Galactic and other players in the suborbital human spaceflight game — companies such as XCOR Aerospace, Armadillo Aerospace and Blue Origin — are also prioritizing safety over speed of development, Gedmark said.

Whitesides acknowledged that Virgin Galactic and the industry are taking longer to get going than many people had expected. But he said that the delay should end up being a footnote in the story of the nascent suborbital spaceflight business.

"If we can get started safely, then no one will remember that it took an extra two years or whatever," Whitesides said. The important thing is to fly safely and responsibly, and in a way that leads to future growth, he added.

Customers waiting it out

Virgin Galactic's customers apparently mostly share Whitesides' view. About 450 people have put down deposits to fly with the company, but only a handful have asked for their money back, Whitesides said. (Virgin Galactic's ticket prices are $200,000, but deposits range from $20,000 on up).

"I really do think that they're not just customers — they're sort of changing history in a way," Whitesides said. "And I think that's something that they're cognizant of."

Jackie Maw, who put her deposit down in 2006, said she isn't getting impatient with the company's progress.

"Remember, this is pioneering technology," Maw, who's from New Zealand but lives in New York City, told SPACE.com in an email. "We are all focused on the safety of the flights, and I daresay most of the future astronauts are happy to wait [until] Scaled and Virgin Galactic are 100 percent satisfied with the flights."

"We hope to get to space next year as well," he said. "And then we'll start commercial operations as soon as we can after that."

XCOR, for its part, is selling seats on its two-person Lynx vehicle for $95,000. The company plans to be in flight test operations by autumn of 2012, XCOR officials have said.

Part of the reason Nield is so bullish on suborbital spaceflight is that he sees the market encompassing more than just tourist jaunts. Before long, there should be a big demand for suborbital research flights, he said, chartered by government agencies, research institutions or other organizations.

Indeed, Virgin Galactic just announced on Thursday (Oct. 13) that it has inked a research-flight deal with NASA. Both Virgin Galactic and XCOR have also signed contracts with the non-profit Southwest Research Institute to fly experiments to the edge of space and back.

"We're seeing different companies decide what niche they want to go after," he told SPACE.com. "There is a significant market, especially if you target individual pieces of that market."

"We're just now discovering what all the markets are," he said. "Different vehicles are going to have different capabilities. There's certainly going to be room for multiple players."