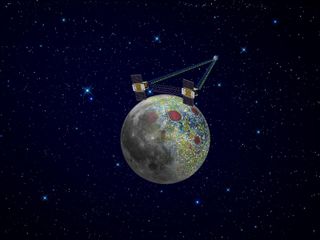 Using a precision formation-flying technique, the twin Grail spacecraft will map the moon's gravity field, as depicted in this artist's rendering. Radio signals traveling between the two spacecraft provide scientists the exact measurements required as well as flow of information not interrupted when the spacecraft are at the lunar farside, not seen from Earth. The result should be the most accurate gravity map of the moon ever made.
(Image: © NASA)

Two NASA spacecraft bound for the moon are in need of some new names, and the space agency is recruiting students for the job.

NASA launched the twin GRAIL probes on Sept. 10 on a mission to orbit the moon and make ultra-precise maps its gravitational field. The $496 million spacecraft will enter lunar orbit at the end of this year.

The two probes are currently called GRAIL-A and GRAIL-B (short for Gravity Recovery And Interior Laboratory), but NASA thinks American schoolchildren can do better.

To that end, NASA has invited students in kindergarten through 12th grade to submit names for the satellites along with a description of the moniker, ranging from a short paragraph to a 500-word essay. All entries must be submitted by a teacher, according to the naming contest's rules.

Entries in the contest are due Nov. 11. The winners will receive autographed moon photos from the spacecraft and will have their names listed on the GRAIL website. Along with their school classes, the winners will be invited to speak to GRAIL mission team members in a teleconference.

"A NASA mission to the moon is one of the reasons why I am a scientist today," Zuber said in a statement. "My hope is that GRAIL motivates young people today towards careers in science, math and technology. Getting involved with naming our two GRAIL spacecraft could inspire their interest not only in space exploration but in the sciences, and that's a good thing."

Even after the spacecraft have begun their science mission around the moon, kids can stay involved. Ride runs a program called Sally Ride Science, which will offer students the chance to direct GRAIL's cameras to take close-up views of the lunar surface in a program called MoonKAM.

This isn't the first time NASA has held a contest to name U.S. spacecraft.

In, 2009 space agency held a student contest to name its next Mars rover, the Mars Science Laboratory, which was ultimately christened Curiosity. The name was suggested by then-6th grader Clara Ma, of Lenexa, Kansas. The space agency's twin Mars rovers Spirit and Opportunity, now on the Red Planet, were also named by students.

NASA also held an online vote in 2009 to name a connecting module on the International Space Station. Fans of TV comedian Stephen Colbert flooded the agency with a write-in campaign, but NASA ultimate named the space room "Tranquility" instead. A space station treadmill was named after Colbert.

The space station module naming process was open to all ages, but the GRAIL spacecraft will only be named by students.

As the two GRAIL spacecraft circle the moon, scientists will track minute changes in the distance between the two vehicles that are caused by small variations in the lunar gravitational field.

These changes, in turn, will reveal more about the moon's structure and makeup to give scientists a clearer picture of how it formed. One of the leading ideas is that the moon was a piece of Earth that broke off when a huge asteroid slammed into our planet around 4.5 billion years ago.

The gravity map provided by GRAIL could also prove useful in choosing landing sites for any possible future human missions to the moon.

Rules and more information for the contest are here: http://grail.nasa.gov/contest