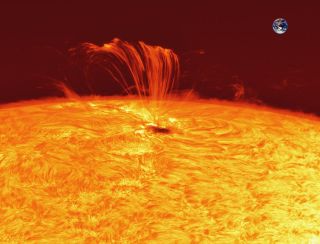 An intrepid skywatcher has snapped an amazing photograph of a massive solar flare erupting from Sunspot 1302 is one of the most active sunspot groups in years.

A sunspot is a blemish on the sun caused by intense magnetic activity. The new photo, captured on Sept. 22 by skywatcher Jean-Pierre Brahic, shows solar plasma magnetically hanging above the sun's surface after the Sunspot 1302 unleashed an X-class solar flare. The image includes an inset of Earth for a size comparison.

Solar flares are powerful storms on the sun that occur when energy stored in twisted magnetic fields (usually above sunspots) is suddenly released. Flares produce a burst of radiation from radio waves to X-rays and gamma-rays. They can also trigger intense solar explosions, called coronal mass ejections, which can hurl massive amounts of solar material into space.

X-class flares are the biggest of the three categories of flares. They are major events that can trigger planet-wide radio blackouts and long-lasting radiation storms.

When Brahic was observing the sun, he was watching an area that scientists have named Active Region 1302, or AR 1302. He had just come home from work on Sept. 22, when he spotted the dazzling prominence of solar plasma through a sun observation telescope.  [Stunning Photos of Solar Flares & Sun Storms]

"And there it was, a shock!" Brahic told SPACE.com in an email. He then switched to a different telescope to snap a photo of the event. "The image, which I saw through the screen of my computer, was fabulous! This gigantic arc rose above the solar limb … we are really little things in front of these celestial [events]."

The massive sunspot region 1302 has produced two X-flares (X1.4 on Sept. 22 and X1.9 on Sept. 24) and is so large it can be seen without a telescope. (WARNING: NEVER stare at the sun with your unshielded eyes, binoculars or a telescope. Permanent eye damage can result Astronomers and skywatchers use special filters to observe the sun.)

"The observation of the sun is fascinating," Brahic said. "Our star evolves hour by hour, from minute to minute. We never observe the same thing."

Coronal mass ejections from AR 1302 have already caused powerful geomagnetic storms around both of Earth's poles, which can supercharge aurora displays. None of the blasts have been squarely directed at Earth, but this could change as the sunspot group evolves toward our planet in the coming days. [Photos: Sunspots on Earth's Closest Star]

When such solar storms are aimed straight at Earth they can pose a threat to satellites and astronauts in space, as well as communications and power stations on the surface.

AR 1302's magnetic activity is currently crackling with sub X-class flares (M-class and C-class) that could grow into larger eruptions as the sunspot continues to evolve toward Earth.

The sun is currently in an active phase of its 11-year solar weather cycle, known as Solar Cycle 24. The cycle will hit its peak period of activity in 2013, NASA scientists have said.