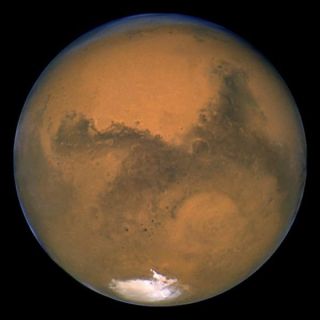 The upper atmosphere of Mars contains up to a hundred times more water than previously suspected, according to a new study that could change our understanding of the Martian climate, and could suggest that more water existed on the surface of the Red Planet in its early history.

Using data from the European Space Agency's Mars Express probe and NASA's Mars Reconnaissance Orbiter, astronomers determined that water in the upper Martian atmosphere undergoes a process known as supersaturation — something astronomers thought could not occur on the dry, dusty planet.

Under most climate conditions, water vapor coalesces around dust and particles in the air. When such dust is sparse, climate models have long assumed that the excess water in the atmosphere on Mars is then converted to ice. [Photos: The Search for Water on Mars]

"Our observations show that as much as ten to a hundred times more water vapor can subsist in a state of supersaturation," Franck Montmessin, of the Laboratoire Atmosphères, Milieux, Observations Spatiales (LATMOS) in France, told SPACE.com in an email interview. Montmessin is part of a team of astronomers led by Maltagliati Luca, also at LATMOS, who studied the data.

When the atmosphere contains little to no dust, however, water cannot use it as a base. Instead, the water must remain in the vapor stage in a state known as supersaturation. The new research is detailed detailed in the Sept. 30 edition of the journal Science.

"Existence of supersaturation has profound consequences for the migration and further persistence of water everywhere on the planet," Montmessin said.

Since the conditions on Mars were thought to impede supersaturation rather than encourage it, the present climate models do not include the process and will need to be revised.

The international team of astronomers analyzed an especially cold season of spring and summer in the northern hemisphere on Mars. But the changed perspective on water vapor around the north pole has consequences for the entire planet. [Latest Mars Photos from NASA's Rovers]

While most of that water returns to the north pole again in the winter, winds blow some of it south. In the meantime, some of the south pole's water moves north.

And some of the water leaves the planet entirely.

"It is believed that Mars has lost a substantial fraction, if not a majority, of its primordial water by escape processes to space," Montmessin said.

Only a small fraction of the water reaches the upper level of the atmosphere, where it is broken up into hydrogen and oxygen atoms that escape into space.

But, if more water is present, then it means a larger quantity is able to escape, and that means more water could have been present in the Red Planet's past than previously thought.

"Now, let's imagine that such a process has gone on and on for billions of years, and you might appreciate the resulting net loss of water for Mars," Montmessin said.

Editor's note: This story was updated to correctly relate the supersaturation process, as well as point out that the discovery applies to the upper atmosphere of Mars.