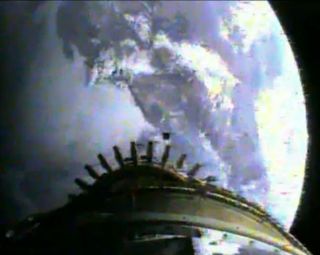 This amazing view shows NASA's Grail-A probe with the blue Earth as a backdrop after the moon gravity probe separated from its Delta 2 rocket. This view was taken by a camera on the Delta 2 rocket shortly after the Grail mission launch from Florida on Sept. 10, 2011.
(Image: © NASA TV)

WASHINGTON — Even in these tough economic times, investing in planetary science is more important than ever, three science advocates told members of Congress today (Sept. 9).

Nye also delivered a petition to Congress supporting funding for planetary science that was signed by more than 20,000 people.

"Budgets are being cut. You have to make hard choices," Nye told SPACE.com. "But we just want to emphasize the great value of planetary science. We've made discoveries that change the world, change our view of what I like to call our place in space." [Photo Tour of Our Solar System]

To emphasize the "return on investment" science brings, Green highlighted some recent achievements of NASA's planetary science program. These include the comet flybys of the agency's Stardust NEXT and Epoxi missions in February 2011 and November 2010, respectively, as well as putting the Messenger probe into orbit around the planet Mercury in March 2011 and launching the Juno probe to Jupiter in August of this year.

"There's just been a whole series of mission events that are stacking up over this last year that have just been phenomenal," Green said. "Each and every one of these things are rewriting the textbooks."

Green also pointed to upcoming events worth looking forward to, such as the planned Saturday (Sept. 10) launch of the twin Grail satellites to orbit the moon, and the liftoff in November of NASA's next Mars rover, the SUV-size Curiosity.

And more missions, yet to be decided on, are on the horizon. Squyres, a Cornell scientist who serves as principal investigator of the Mars rovers Spirit and Opportunity currently on the Red Planet, recently chaired the National Research Council's Planetary Science Decadal Survey. [Mars Photos by Spirit and Opportunity]

The decadal survey prioritized the science community's goals for planetary science over the next 10 years, highlighting particular missions that deserve NASA's investment. One of the foremost of these is a series of missions to Mars to collect rock samples and return them to Earth.

"The best science is always going to be done with returned samples," Squyres said. "There is no way you can match the kind of scientific quality that exists in state-of-the art labs on Earth."

While the science payoff of a Mars sample return mission would be huge, Squyres said, it would be costly and would require three separate spacecraft launched to Mars at intervals.

Other missions on the survey's wish list are a spacecraft to study the subsurface liquid ocean thought to exist on Jupiter's icy moon Europa, and an orbiter to Uranus or Neptune. In fact, almost all the planets of the solar system are guarding mysteries that scientists would love to crack with dedicated missions.

With NASA's space shuttles now retired, the agency hopes to shift some of the public's focus to its unmanned planetary science missions, Green said. Space shuttle launches typically attracted hundreds of thousands of spectators to Florida's Space Coast; in comparison, about 300 or 400 people would often go see a robotic spacecraft blast off.

But for Juno's launch to Jupiter this summer, NASA charged itself with attracting 10,000 people to come view the liftoff from Florida's Cape Canaveral Air Force Base. The agency surpassed its goal, counting a final tally of 12,300 spectators. [Launch Photos: NASA's Juno Probe Heads for Jupiter]

"It's important to let people know what these missions are all about," Green said. "It's not always about the shuttle. This is the era of planetary science. It's going to be a while before humans leave Cape Canaveral [again], but we're going to be continually launching missions, exciting missions, to fabulous places."

Ultimately, studying the planets and bodies in the solar system reveals more about Earth — how our planet formed, evolved and gave rise to life, the experts said. The holy grail of many planetary science missions, of course, would be to find life on another planet or moon.

"We are in the middle of a revolution right now," Green said. "Right now life is an Earth-centered-only concept. But if there is life beyond the Earth and we find that in the solar system or beyond, it will be that revolution just like the Copernican theory" that found the Earth orbits around the sun, and not the other way around.