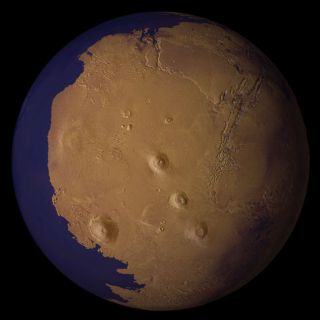 A view of Mars as it might have appeared more than 2 billion years ago, with an ocean filling the lowland basin that now occupies the north polar region.
(Image: © Taylor Perron/UC Berkeley)

The existence of an ancient, frigid ocean on Mars that was surrounded by glaciers could explain the unusual minerals found making up the northern lowlands of the Red Planet, a new study suggests.

These findings add new evidence to the idea that ancient Mars was once cold and wet, not cold and dry nor warm and wet as is often argued.

Astrobiologist Alberto Fairén at the SETI Institute and NASA Ames Research Center and his colleagues investigated why the early crust of the northern Martian lowlands apparently lacks a mineral group called phyllosilicates when compared to similarly aged crust in the planet's southern lowlands. These minerals are common in marine sediments on Earth. [Photos: The Search for Water on Mars]

Their climatic and geochemical models suggest that if a northern ocean existed on Mars, it would have been close to freezing. Moreover, features around the proposed ocean basin are consistent with the presence of large glaciers, such as underwater stretches of rocky debris known as moraines. Near-freezing temperatures and large glaciers would prevent phyllosilicates from forming and depositing in a lowland ocean basin.

"Our multidisciplinary analyses offer an explanation for the existence of an ocean in the past of Mars which is consistent with the mineralogy detected so far by orbiters and landers," said Fairén, lead author of a study appearing online Aug. 28 in the journal Nature Geoscience. "If there were oceans on Mars, they were cold glacial, similar to the polar seas on Earth. The coasts would be rimmed by glaciers, and portions of the ocean would be ice-covered."

There are currently two leading ideas for what the climate of ancient Mars might have been like.

One is that it was cold and dry, asserting that valley networks and other geological features suggestive of liquid water in Mars' past were essentially results of bursts of heat confined in space and time, suggesting that Mars could not have sustained oceans. The other is that Mars was once warm and wet, implying that it could once have supported lakes, seas and rainfall for long periods.

"I became interested in this idea after realizing the contradiction among the geological evidence, which points out that liquid water was once abundant on Mars, and the climate models, which so far have had a difficult time explaining warm conditions on early Mars allowing water to remain in the liquid state," Fairén told SPACE.com.

Instead, the researchers are suggesting an ancient Mars that was wet but not warm.

"A cold and wet Mars seems to be a suitable solution for this decades-long standing puzzle, and a glacial northern ocean would fit perfectly in that cold and wet scenario," Fairén said.

The scientists are currently searching for additional evidence of a cold Martian ocean in global datasets, including analyzing the evolution of glacial coastal land features, looking for signs of icebergs and preparing additional low-temperature geochemistry models.

"This is not an easy job, as the evidence for the ancient ocean is mostly buried under tons of more recent materials, including kilometer-thick sedimentary and volcanic deposits, which make our work more and more challenging," Fairén said.