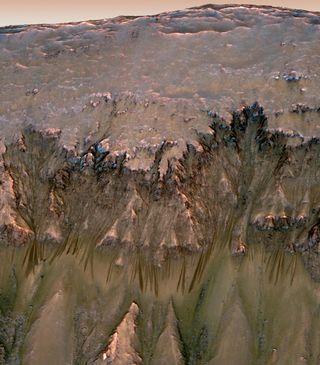 Salt water might flow down some Martian slopes each spring.

As detailed in the Aug. 5 issue of the journal Science, the research team in charge of the Mars Reconnaissance Orbiter (MRO), a NASA probe, say they've observed seasonally varying features on the surface of the Red Planet that could be carved by flowing salt water.

Is there H2O on Mars?

Yes. Ice has been found on Mars at the planet's poles, inside some craters and sitting beneath the surface across vast swaths of the mid-latitudes. Furthermore, there is plenty of evidence that liquid water formed vast oceans on Mars in the distant past, carving valleys and other surface features. But no one knows when water last flowed on the Red Planet's surface, or whether it still does. [Photos: The Search for Water on Mars]

Why do the scientists now think there could be liquid water on the surface of Mars?

Led by Alfred McEwen, a planetary scientist at the University of Arizona, the MRO team has observed unexplained features in photos of Mars taken by the High Resolution Imaging Science Experiment (HiRise), a camera on the MRO probe.

The features were brought to their attention by Lujendra Ojha, a University of Arizona student who ran images spanning three Martian years through an algorithm he created to detect changes in the planetary surface over time. He found clusters of dark, narrow streaks that appear on steep slopes during the warmest months of the Martian year, then fade in winter.

In a statement, Ojha said these "recurring slope lineae" are "different from slope streaks that had been observed before. These are highly seasonal, and we observed some of them had grown by more than 200 meters [650 feet] in a matter of just two Earth months." [Will We Really Find Alien Life Within 20 Years?]

The narrow streaks emerge only on slopes in the planet's warmest regions, and usually on the sides of craters facing the equator, which get more sun. This is important because on Mars, which is much colder than Earth, water would be able to exist in liquid form only in the warmest areas.

Are they sure the streaks are caused by water?

No. The newfound streaks are not proof of water on Mars. However, as of now, water is the likeliest explanation for them.

"We've been trying to come up with alternate ideas, maybe some sort of dry avalanching process, but none of them work," McEwen told SPACE.com. "Why does this only seem to happen at certain temperatures and latitudes, and why darken and fade? Briny water seems to be the most viable explanation for these observations so far."

What's the source of the alleged liquid water?

Why do researchers think the alleged water must be salty?

In the middle latitudes of Mars (near its equator), the temperature averages  about 50 degrees below zero Celsius (minus 58 Fahrenheit), and goes down to 60 below (minus 76 F) at night. At noon on a summer day, however, the temperature can rise to 0 C (32 F). That's exactly the melting point of pure water. This means pure water would stay frozen on Mars except on particularly hot summer days.

Salt water has a slightly lower melting point, though: Briny seawater turns liquid at minus 1.9 C (29 F). Therefore, if there's liquid water for long stretches of in the summer on Mars, it's probably salty.

Why would liquid water on Mars be important?

With a handful of exceptions, water is necessary for life as we know it. Not only is most of Earth's life water-based, but most scientists think life wouldn't have arisen in the first place if not for the watery "primordial soup" that covered the young Earth. Water makes it easier for organic molecules to swirl around and bump into each other to form interesting compounds. [What Are the Ingredients of Life?]

McEwen said that "if there is extant life on Mars, it might be accessible in these brines."

Yes. In 2000, for example, scientists analyzing data from NASA's Mars Global Surveyor spacecraft found what appeared to be gullies formed by flowing water, as well as debris and mud deposits these flows may have left behind. These features appeared so fresh that the researchers thought they might still have been forming. The changing appearance of gullies on Mars over time supported their findings, they later said. That time, like now, the strange surface features also earned a place in the journal Science.

However, some scientists theorized that the gullies were mudflows caused by collapsing permafrost deposits. Others said the gullies couldn't have been carved by water because they occurred on the coldest faces of slopes at mid-latitudes, rather than the hottest. Either way, the gullies were not considered a "smoking gun" in the search for liquid water.

Later, in 2009, researchers suggested that globs of salty water were seen on the legs of NASA's Phoenix Mars Lander. But others on the same team countered that the spots may have been frost instead.

When will we know for sure whether there's liquid water on Mars?

The ExoMars mission from NASA and the European Space Agency, planned for launch in 2016, will detect trace gases in the Martian atmosphere, including water vapor. It might be able to determine whether the surface streaks really are caused by brines by looking for water vapor above them. "[ExoMars] could look for local enrichment of water and see if it corresponds to the times and places of these streaks," McEwen said.