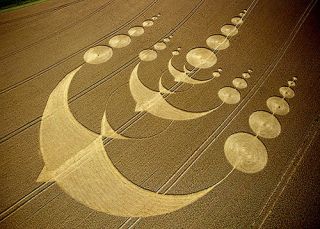 This design of three flying birds was created on Aug. 3, 2003, in the county of Wiltshire in southern England. The birds, which resemble swallows, have ever-diminishing circles trailing behind their wing tips.
(Image: © public domain)

The artists behind increasingly elaborate crop-circle patterns are most likely skilled in math, necessary to plot epic designs, and technologically savvy enough to employ tools like microwave generators, according to a physicist.

"Today's crop-circle designs are more complex than ever, featuring up to 2,000 individual shapes arranged using intricate construction lines that are invisible to the casual observer," writes Richard Taylor, director of the Materials Science Institute at the University of Oregon, in this month's issue of Physics World. [Photos: Mysterious Crop Circles]

Traditional tools employed by these mysterious artists included "stompers," wooden planks attached to two hand-held ropes and bar stools so they could traverse crops without disturbing them. Now, crop-circle artists have access to computing power to generate fractal designs, lasers, microwaves and global positioning systems (GPS), according to Taylor.

The first crop circles appeared in English fields in the 1600s.The first scientific explanation was offered in 1686 by the British scientist Robert Plot, who discussed them in terms of airflows from the sky, Taylor writes. About three centuries later, the meteorologist and physicist Terence Meaden pointed to whirlwinds, then moved to an electro-magneto-hydrodynamic "plasma vortex" to explain increasingly elaborate patterns.

In 1991, two men in their 60s came forward and claimed responsibility for the circles, which they had created, in increasing complexity, to start a UFO hoax. (They didn't claim to have created all the crop circles around at the time, though.)

Crop circles represent the most science-oriented art movement in history: They are often built using hidden mathematical relationships, and since 1991, famous fractal designs, including the Triple Julia, have appeared regularly, according to Taylor. The three-armed Triple Julia is based on an equation formulated by the mathematician Gaston Julia in 1918.

"The increase in available computing power has also meant that iterative equations are now frequently used to generate fractal shapes such as the Triple Julia design, which reappeared in Switzerland last year," Taylor writes.

Some researchers found changes to the crops themselves that indicate they were superheated using electromagnetic radiation. They speculated that the mysterious balls of light reported over the sites or Meaden's plasma vortex may have been responsible.

These explanations are too elaborate for Taylor, who has offered another explanation for the radiation: "Might some artists therefore be supplementing physical implantation techniques with microwaves?"

Beyond artistry and conspiracy theories, circle formation techniques have serious implications, since the damaged crops are still harvested and enter our food chain, he writes.

This story was provided by LiveScience, sister site to Space.com. You can follow LiveScience writer Wynne Parry on Twitter @Wynne_Parry.