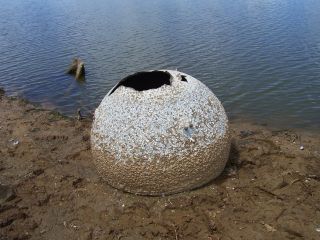 This tank from the space shuttle Columbia, which was destroyed during re-entry to Earth in 2003, was found in 2011 in east Texas.
(Image: © Nacogdoches Police Department)

A piece of debris from NASA's space shuttle Columbia has been discovered in Texas, eight years after the 2003 disaster that destroyed the spacecraft and killed its seven-astronaut crew during re-entry, NASA officials confirmed today (Aug. 2).

The debris was discovered last week in eastern Texas. It is a round aluminum power reactant storage and distribution tank from Columbia, which disintegrated over Texas as it re-entered Earth's atmosphere near the end of a 16-day science mission.

The tank was discovered in an exposed area of Lake Nacogdoches, in Nacogdoches, Texas, about 160 miles northeast of Houston. [Photos: Remembering NASA's Shuttle Columbia Disaster]

"The only reason it's exposed is because there's a drought going on and the tank was under the lake," Lisa Malone, a NASA spokeswoman at the agency's Kennedy Space Center in Florida, told SPACE.com. "The tank itself is full of mud."

Nacogdoches police informed NASA of the find and sent pictures for identification. NASA engineers who work on the shuttle's power reactant storage and distribution systems were able to confirm the piece belonged to Columbia. [Columbia Tank Finding Explained ]

"One of the guys had been here more than 30 years and recognized it, and said, 'That’s one of the tanks,'" Malone said.

The piece was one of 18 tanks on the shuttle that stored supercold liquid oxygen and liquid hydrogen. The spherical tank, about 40 inches (1 meter) in diameter, will eventually be shipped back to Kennedy Space Center, where NASA stores all the collected debris from Columbia in a climate controlled area in the giant Vehicle Assembly Building.

"We're working the plans and details out right now as to how we would get it shipped back here," Malone said. "We do want to collect the debris items and keep them in one place."

To date, about 38-40 percent of the Columbia orbiter's wreckage has been recovered. The remainder was either burned up during reentry or is still where it landed in Texas and Louisiana.

"From time to time throughout the year we do get phone calls and emails from people about items they think are debris," Malone said.

The 2003 disaster was traced back to a hole that was punched into one of Columbia's wings by a piece of debris from its fuel tank during launch, according to the findings of a review board that investigated the accident. The hole rendered the orbiter unable to withstand the intense heat of re-entry, causing the vehicle to disintegrate.

Discoveries of debris from the wreck can still serve to reopen old wounds.

"It always makes you think about the accident and Columbia and the crew of course," Malone said. "It always does serve as a reminder."

Following the catastrophe, NASA upgraded equipment and processes to protect against a similar failure. All post-Columbia shuttles flew with external tanks that had been redesigned to diminish the amount of debris from their insulating foam that fell off during liftoff.

As a further precaution, recent crews conducted thorough inspections of their orbiters' heat shields once in orbit to make sure they hadn't sustained any damage that would endanger them during landing.

The Columbia accident was the second disaster in the history of the 30-year space shuttle program. It followed the 1986 destruction of the shuttle Challenger and its crew. Exceptionally cold weather at Challenger's Florida launch site that day caused a failure in an O-ring seal on one of the shuttle's solid rocket boosters that ultimately pulled apart the vehicle.

Last month NASA retired its remaining three space shuttle orbiters. The shuttle Atlantis landed July 21 to finish the 135th and final mission of the shuttle program. Now Atlantis and its siblings Discovery and Endeavour will be retired to museums, while NASA embarks on a new program to build vehicles for deep space exploration.