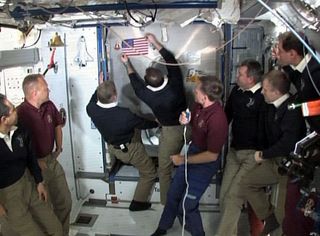 A flag flown on the first and last space shuttle missions is hung near a model of the shuttle on the International Space Station on July 18, 2011 to mark NASA's final shuttle mission before the fleet is retired.
(Image: © NASA TV)

An autographed space shuttle model and a U.S. flag flown on the first and last shuttle missions will remain on the International Space Station (ISS) to serve as a monument to the end of NASA's shuttle program and a goal for its successor.

"You know when great things are accomplished and pivotal moments occur in history, we have monuments and statues," shuttle Atlantis' commander Chris Ferguson said Monday (July 18). "We would have loved to have brought a monument, but we couldn't bring [one]."

"What we did to celebrate this final shuttle flight docking to the International Space Station, we brought the best monument we could possibly find and that is a space shuttle model," said Ferguson, presenting the station crew with a 1:100 scale (about 14.5 inches-long) model of the winged orbiter.

The shuttle replica accompanied an expected presentation of a U.S. flag that was flown on the first and last shuttle missions. The 8- by 12-inch flag, which was revealed by President Barack Obama during his call to the astronauts last week, will stay on board the station until the shuttle's successor arrives.

"This flag represents not just a symbol of our national pride and honor, but in this particular case, it represents a goal," Ferguson said. "This flag will be flown prominently here by the forward hatch of Node 2, to be returned to Earth once again by an astronaut that launches on a U.S. vehicle, hopefully in just a few years." [9 Weird Things That Flew On NASA's Shuttles]

Both the model and flag were hung near and on the hatch where 35 space shuttle crews have entered the station and where the STS-135 astronauts exited for a final time soon after presenting the mementos. Ferguson and his three crewmates are scheduled to undock space shuttle Atlantis early Tuesday morning and return to Earth two days later.

"During the course of the International Space Station construction, all those space shuttles that docked there left the legacy of this incredible, orbiting research facility that not only is going to be a stepping stone to exploring the rest of the solar system, it's also really improving life on our planet," said station flight engineer Ron Garan, representing NASA. "So we thought it was really a fitting place to put that."

The space shuttle model, which was briefly seen earlier in the STS-135 mission during the crew's televised tribute to the shuttle workforce, represents the men and women who for more than three decades made the program possible.

"This space shuttle model was signed by the modern day titans of the space shuttle program, including [program manager] John Shannon, [deputy shuttle manager] LeRoy Cain, [launch director] Mike Leinbach, [and] our lead flight directors Kwatsi Alibaruho and Chris Edelen," Ferguson said. "What you don't see, are the signatures of the tens of thousands who rode to orbit with us over the past 30 years, if only in spirit."

ISS flight engineer Mike Fossum, whose own career dates back to November 1981 working in Mission Control for the second shuttle mission, accepted the model on behalf of the program's past and present workforce. [Photos: Building Space Shuttle Atlantis]

"Hundreds of thousands of people have contributed to the shuttle program through many years -- 30 years of flying service and another decade and a half of development before that," Fossum said, adding that "the space shuttle program has inspired millions and millions more."

"We're happy to have this model as one of the greatest testaments to the shuttle's incredible capability, that 90 percent of the world's population can look out of their backyards at night and see us going overhead," Fossum said, hanging the model on the wall next to the shuttle's docking port hatchway.

"It looks absolutely fantastic there Mike. It's the next best thing to really being here," said Ferguson.