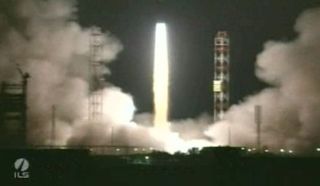 Communications satellites for North America and Kazakhstan blasted off on top of a Proton rocket Friday, beginning a lengthy nine-hour journey to orbit that includes a series of six firings of the rocket's Breeze upper stage engine.

The first stage propelled the rocket into the upper atmosphere just before sunrise, then the Proton's second and third stages finished their burns in less than 10 minutes. The rocket's Breeze M upper stage ignited a few minutes later to inject the SES 3 and Kazsat 2 satellites in a stable parking orbit, according to International Launch Services, the U.S.-based firm overseeing commercial sales of the Proton.

Five more burns of the Breeze M's hydrazine-fueled engine will raise the altitude of the rocket and move it closer to the equator.  [Spaceflight Now Photos: Proton Rocket Moves to Launch Pad]

Kazsat 2 rode on the lower section of the dual-satellite stack. SES 3 was located in the upper position inside the Proton's payload fairing.

Friday's Proton flight is the first time International Launch Services has paired a commercial satellite with another payload on the same mission. Previous Proton launches have placed multiple Russian government satellites into orbit on the same flight.

SES 3 will be placed in an elliptical geosynchronous transfer orbit stretching from about 2,300 miles to more than 22,300 miles in altitude, with an inclination of 24.7 degrees.

The final Breeze M burn will put Kazsat 2 in a circular 22,000-mile-high orbit over the equator.

The launch is the second Proton mission of the year, but the rocket has a busy manifest of commercial, government and military missions planned for the rest of 2011.

Built by Orbital Sciences Corp. of Virginia, SES 3 is beginning a 15-year mission to deliver educational, international and high-definition programming across the United States and the Caribbean for SES World Skies. It's the second of three similar spacecraft launched for SES World Skies, following a Proton flight with SES 1 last year and the planned launch of SES 2 on an Ariane 5 rocket in August or September.

SES 3 will replace the aging AMC 1 spacecraft launched on an Atlas 2A rocket in 1996. After a series of thruster firings to guide itself to its final orbital post, SES 3 will begin service from 103 degrees west longitude.

Kazsat 2 is destined for a 12-year mission to beam television broadcasts across Kazakhstan and Central Asia.

Owned by the government of Kazakhstan, Kazsat 2 was manufactured by Khrunichev and carries communications instruments built by Thales Alenia Space. The payload consists of 20 Ku-band transponders.

Khrunichev also provided a control center and ground station under the agreement to construct Kazsat 2.

Kazsat 2, which weighed 2,800 pounds at launch, will be parked in geosynchronous orbit at 86.5 degrees east longitude.