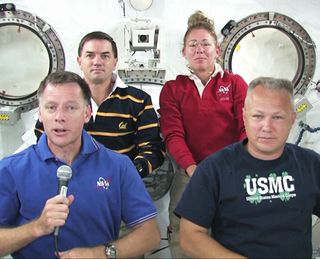 Throngs of "Harry Potter" fans will flock to theaters this weekend for the fantasy film franchise's finale this weekend, but the Atlantis shuttle astronauts in space won't be among them.

The latest Potter franchise film "Harry Potter and the Deathly Hallows: Part 2" opens on Friday (July 15). But while NASA has beamed "Harry Potter" and "Star Trek" films into orbit for astronauts before, the crew of Atlantis is simply just too busy for movies, NASA says.

NASA spokeswoman Nicole Cloutier-Lemasters, of the Johnson Space Center in Houston where the agency's Mission Control Center is based, told SPACE.com that the four Atlantis astronauts are completely focused on their mission to deliver nearly 5 tons of supplies to the International Space Station.

"Due to the incredibly busy mission pace, there were no plans for movies on this mission," Cloutier-Lemasters said in an email. [Photos: NASA's Last Shuttle Mission in Pictures]

Atlantis launched toward the space station July 8 on NASA's final shuttle mission before the orbiter fleet retires this year. The 13-day mission is delivering enough supplies to help keep the station going for another year, NASA officials said.

And with Atlantis carrying a smaller-than-normal crew (most shuttle crews include six or seven astronauts), there is more than enough work to go around. The shuttle crew is working alongside the six astronauts living on the space station, with all 10 spaceflyers expected to work through the upcoming weekend.

So, no Harry Potter film finale in space this time. But that doesn't mean NASA hasn't kept astronauts in touch with the latest films in the past.

In 2009, when the new "Star Trek" movie hit theaters on Earth, NASA beamed up a copy to the International Space Station so American doctor-turned-astronaut Michael Barratt — a sort of real-life Dr. McCoy — could catch the film without having to wait until returning to Earth.

The same goes for the "Harry Potter" films too.

In 2005, NASA astronaut Bill McArthur was commanding the International Space Station when the fourth Potter flic ("Harry Potter and the Goblet of Fire") was released.

McArthur was apparently a Potter-phile; he asked Mission Control if it would be possible to see the Potter movie before his six-month mission was up. Mission Control and Warner Bros. Pictures worked together to make it happen.

The International Space Station in particular has a growing library of DVDs, books and CDs, as well as digital archives, available for use by astronauts. Crews can use the Internet, post Twitter updates and images from orbit, and pick up an Internet Protocol phone to call loved ones on Earth.

NASA at the movies

There have also been some veiled Potter references by NASA astronauts over the years.

As a side note, the STS-124 shuttle flight was commanded by astronaut Mark Kelly, who also led the final flight of shuttle Endeavour in May, NASA's STS-134. For the Endeavour mission, Kelly and his crew recreated a science fiction poster: the poster for 2009's "Star Trek."