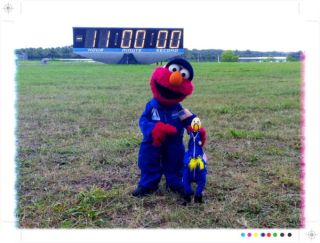 A tent full of space shuttle fans got a surprise visit from Sesame Street's Elmo a day before the space shuttle Atlantis is scheduled to launch on the final mission of NASA's space shuttle program.

NASA is hosting a two-day gathering of 150 shuttle fans for a so-called "tweetup" at the Kennedy Space Center in Florida. In addition to the astronauts and engineers that have come to meet the NASA groupies was Elmo, the furry red muppet from the popular children's program Sesame Street.

The muppet dropped by today (July 7) with astronauts Mike Massimino and Doug Wheelock to answer questions about space. Elmo wore a mini blue flight suit to match those worn by his real-life astronaut companions.

Atlantis is slated to liftoff tomorrow (July 8) at 11:26 a.m. EDT from the seaside Launch Pad 39A at the Florida spaceport. Current forecasts are showing that potential stormy weather could thwart tomorrow's launch, but that has not dampened the spirits of the tweetup participants.

"Going around the #nasatweetup tent for introductions. An amazing group of people from ALL walks of life," Todd Seip, from Pueblo, Colo., wrote via Twitter this morning.

Only a few miles away from where the space shuttle Atlantis stands ready for its launch, the tent full of space tweeters are feverishly trying to capture and share the historic moments on Twitter (all in 140 characters or less). [Shuttle Launch Countdown: T-9 Minutes to Blastoff]

Beginning today, the tweeters will participate in a variety of special events, as preparations continue for tomorrow's launch.

In his visit to the tweetup tent, Elmo chatted with Massimino and Wheelock about what it's like to launch on a space shuttle, daily life onboard the International Space Station, and why it's important to study math, science and engineering to become an astronaut.

Sesame Street is filming Elmo at Kennedy Space Center for a special segment as he learns about space exploration at NASA, agency officials said.

NASA fans from across the United States and international destinations like Canada, France, Germany, Japan and the U.K. were selected by the agency to take part in the tweetup and bear witness to the historic final launch of the shuttle program. NASA randomly selected the tweetup participants out of 5,500 people who applied, agency officials said in a statement.

"The 150 tweeps at #NASATweetup are a sample of the best of the USA. Proud to be part of this group!" wrote Patty Cleveland, a photographer who traveled to Florida from Georgia.

During the two-day event, the tweeters will also have the opportunity to talk to Lori Garver, NASA's deputy administrator, Bill Gerstenmaier, NASA's space operations chief, Massimino and Wheelock, among others.

"NASA has an unbelievable future, as you know," Garver told everyone in the white tweetup tent. "We stand on the shoulders of giants with this amazing shuttle program. We couldn't be happier that you are all here. Enjoy the show."

Tweetup participants will also have the opportunity to tour Kennedy Space Center, including a stop at the launch pad. They will also be able to take part in the festivities as Atlantis' four astronauts exit crew quarters and wave to the crowds before being driven to the launch pad for their scheduled launch.

Visit SPACE.com for complete coverage of Atlantis's final mission STS-135 or follow us @Spacedotcom and on Facebook.