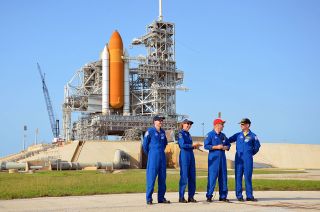 NASA officials are convening today (June 28) for an all-day discussion about the space shuttle Atlantis' upcoming mission, and to set an official launch date for the final flight of the agency's shuttle program.

Mission managers will conduct one final check today, called the Flight Readiness Review (FRR), to assess whether Atlantis, its four-astronaut crew, and the International Space Station are adequately prepared for the orbiter's launch on the 135th and final flight of NASA's 30-year shuttle program.

Atlantis is currently targeted to lift off from NASA's Kennedy Space Center in Florida on July 8, but agency officials will announce an official launch date following the end of the FRR meeting. [Gallery: Shuttle Atlantis' Last Launch Pad Trek]

During today's meeting, program managers, flight directors, mission managers and other top agency officials will discuss any outstanding issues from the previous flight — Endeavour's STS-134 mission — and assess the workflow for the upcoming launch and the readiness of the shuttle, astronauts and ground teams.

"No stone is left unturned," NASA spokesman Allard Beutel told SPACE.com. "It's literally a top-to-bottom review of everything that involves the flight readiness of this mission. They discuss the readiness of the crew, readiness of the ISS to be able to handle the shuttle mission and go over each individual component, like the solid rocket boosters, external tank, how the range is prepared, flight crew operations, conditions at trans-oceanic abort landing sites. They discuss all of these things and more."

On June 21, a Flight Readiness Review at the shuttle program level was conducted, and officials unanimously voted to proceed with launch preparations.

"It looked at almost exactly the same issues, but at a program level," Beutel said. "They brought all the details to the surface and made sure they were ready to talk about all the issues and bring it all before senior management. The shuttle program FRR is where they identify anything that may need to be researched or explained more thoroughly before the executive level meeting."

Atlantis is scheduled to launch on a 12-day resupply mission to the International Space Station. Atlantis' STS-135 mission will be the final flight before NASA's three orbiters are retired for good. After 30 years, the agency is bringing its iconic shuttle program to an end to focus on human exploration missions beyond low-Earth orbit.