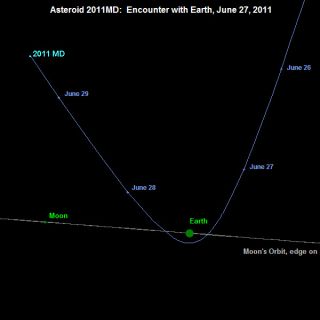 An asteroid the size of a tour bus will fly past Earth today (June 27) so closely it will be beneath some of the planet's satellites.

There is no risk of an impact, NASA scientists said. The space rock, estimated to be between 29 to 98 feet (9 to 30 meters) wide, is likely too small to survive a plunge through our atmosphere anyway. An asteroid this size, if it were mostly stony, would break apart and burn up before hitting the surface. Iron-heavy space rocks are better at surviving the fiery entry, however.

Either way, calculations show that asteroid 2011 MD will make a dogleg shift in its trajectory and scoot on by.

"There is no chance that 2011 MD will hit Earth but scientists will use the close pass as opportunity to study it w/ radar observations," astronomers with NASA's Asteroid Watch program at JPL said. [Photos: Asteroids in Deep Space]

At closest approach, the asteroid will be above the coast of Antarctica. It will be well below geosynchronous satellites, which orbit 22,236 miles (35,786 km) above Earth. Experts say there is little chance the rock will hit a satellite, simply because of the vast expanse and relatively small number of satellites.

The asteroid will remain well above the orbit of the International Space Station, which flies about 220 miles (354 km) above Earth.

Objects the size of 2011 MD usually make close Earth passes like today's event every six years or so, NASA estimates. However, not all of them are discovered. This rock was discovered June 22. The closest recorded space rock pass was made by asteroid 2011 CQ1, which came within 3,400 miles (5,471 kilometers) of Earth on Feb. 4 of this year.

Asteroid 2011 MD will be likely visible in medium-sized telescopes by experienced observers who are able to find and track a moving object. Even NASA doesn't expect to see much, however.

"We won't likely be releasing photos of the object since they would only be points of light," Don Yeomans, of NASA's Near-Earth Object Program Office at NASA's Jet Propulsion Laboratory, told SPACE.com. "Radar astronomers will attempt observations but 2011 MD is so small that even if successful, there are not likely to be any noteworthy images released."