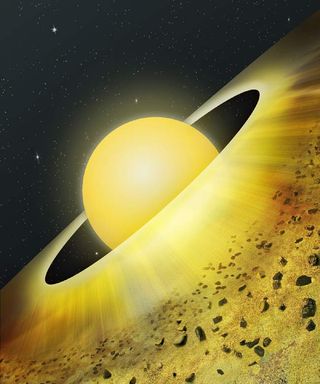 A vastcollection of space pebbles surrounding a relatively nearby star is a planetaryconstruction zone, astronomers said today.

The star, TWHydrae, is young and ripe for developing new worlds.

Newobservations reveal a swath of pebble-sized material extending at least abillion miles from the star. It's just the sort of stuff theory says is neededfor making comets, asteroids and eventually planets around a young star.

"We'reseeing planet building happening right before our eyes," David Wilner of the Harvard-Smithsonian Center for Astrophysicssaid Friday.  "The foundation has been laid and now the buildingmaterials are coming together to make a new solar system."

After a staris born, it takes millions of years for a planet to form, astronomers believe.TW Hydrae is about 10 million years old.

Only a fewsets of observations have shown the planet-formation process inprogress, and scientists have yet to witness all the phases, therebyletting them piece together a full chain of events based not just on theory butreal evidence. It's also notknown if there is just one primary mechanism for building a planet or ifthere might be two or more.

Wilnerand colleagues used the National Science Foundation's Very Large Array tomeasure radio emissions from TW Hydrae. The length of theradio waves suggest the size of particles from which they emanate.

"Thestrong emission at wavelengths of a few centimeters is convincing evidence thatparticles of about the same size are present," said co-research Mark Claussen of the National Radio Astronomy Observatory."No one has seen this before."

One giantplanet may already have formed.

A computersimulation of the disk of material around the star, based on previous infraredobservations, reveals a gap that extends from the star out to a distance ofabout 400 million miles -- similar to the distance to the asteroid belt in oursolar system. The gap likely formed when a giant planet sucked up all thenearby material, leaving a hole in the middle of
the disk, the astronomers say.

Located about180 light-years away in the constellation Hydra the Water Snake, TW Hydrae isnearly as massive as our Sun.

"TWHydrae is unique," Wilner said. "It'snearby, and it's just the right age to be forming planets. We'll be studying itfor decades to come."

This results were detailed June 20 in AstrophysicalJournal Letters.