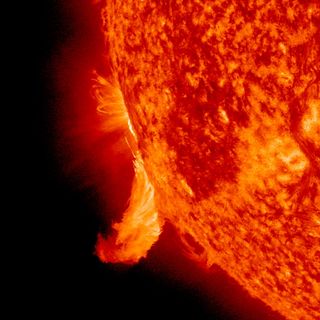 A close-up, profile view of an active region in extreme ultraviolet light showcased several small spurts of plasma as they flickered out and retreated back into the sun over about 13 hours (June 16, 2011). This wavelength captures ionized helium at about 60,000 degrees not far above the sun's surface. Flashes of small solar flares can be seen triggering most of these spurts.
(Image: © Solar Dynamics Observatory)

In September 1859, the sun unleashed one of the most powerful storms in recorded history. The solar eruption induced electrical currents that set telegraph offices on fire and sparked dramatic displays of northern lights over Cuba and Hawaii.

Scientists and officials from a range of organizations gathered in Washington, D.C., yesterday (June 21) to ask a simple but frightening question: What if it happens again?

"A similar storm today might knock us for a loop," Lika Guhathakurta, a solar physicist at NASA headquarters, said. "Modern society depends on high-tech systems such as smart power grids, GPS and satellite communications — all of which are vulnerable to solar storms." [Infographic: Anatomy of Sun Storms and Solar Flares]

Guhathakurta was one of more than a hundred attendees of the fifth annual Space Weather Enterprise Forum. SWEF aims to raise awareness of space weather and its effects on society, especially among policymakers and emergency responders. Yesterday's meeting drew representatives of the United Nations, Congress, NASA, power companies and more.

When the 1859 storm erupted, the sun was immersed in a below-average solar cycle (solar activity waxes and wanes over periods of roughly 11 years). That event served as a reminder that strong storms can occur even when the cycle is weak — as seems to be the case again in 2011, during our current Cycle 24. [Video: Huge Solar Eruption of June 7, 2011]

While the 1859 storm halted telegraph messages and puzzled a lot of skywatchers in the tropics, an eruption of that magnitude today would be much more serious, researchers said.

According to a 2008 report from the National Academy of Sciences, a massive solar storm could have the economic impact of 20 Hurricane Katrinas. That hurricane caused an estimated $80 billion of damage.

Preparing for the storm

So what can scientists, and society, do to stave off such consequences? For starters, the researchers say, we could try to forecast and track solar storms more accurately, to give the planet more time to prepare.

And such efforts are well under way.

"We can now track the progress of solar storms in three dimensions as the storms bear down on Earth," said SWEF speaker Michael Hesse, chief of the Space Weather Lab at NASA's Goddard Space Flight Center. "This sets the stage for actionable space weather alerts that could preserve power grids and other high-tech assets during extreme periods of solar activity."

Hesse and his colleagues feed data into supercomputers from a fleet of NASA spacecraft around the sun, including the twin Stereo probes and the Mercury-studying Messenger. Within hours of a major eruption, the computers will spit out a 3-D movie that predicts where the storm will go, which planets and spacecraft it will hit and when the impacts will occur.

"This is a really exciting time to work as a space weather forecaster," said Antti Pulkkinen, a researcher at the Space Weather Lab. "The emergence of serious physics-based space weather models is putting us in a position to predict if something major will happen."

Some of the computer models are so sophisticated, they can predict electrical currents flowing in Earth's soil when a solar storm strikes. These currents are what do the most damage to power transformers, so having good models could help officials stop a blackout cascade, researchers said.

While Earth can get hammered by the fast-moving particles and radiation unleashed by a solar eruption, the planet's atmosphere shields us on the ground to a degree. But astronauts in space are on the front lines.

NASA keeps careful track of each astronaut's accumulated dosage throughout his or her career. Accurate space weather alerts could help keep these exposures under control — for example, by postponing spacewalks when solar flares are likely.

And not all forecasts have to raise alarm bells. Some could help NASA mission planners determine the best times for astronauts to go out on an hours-long spacewalk.

"We could use 'All clear' alerts," Allen said. "In addition to knowing when it's dangerous to go outside, we'd also like to know when it's safe. This is another frontier for forecasters — not only telling us when a sunspot will erupt, but also when it won't."