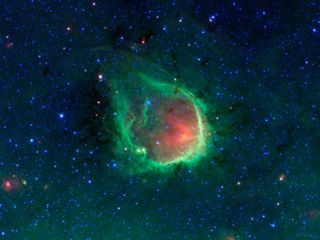 A glowing ring spotted in space seems at first more like superhero fiction than science fact. But that's what NASA's Spitzer Space Telescope found in the murky clouds encircled by the tail of the constellation Scorpius.

The new photo of the bright emerald nebula, released Wednesday (June 15), is reminiscent of the glowing ring wielded by the comic book superhero Green Lantern, who derives his strength from the band forged by the diminutive Guardians of the Planet "Oa," according to a NASA description. The film version of "Green Lantern", starring Ryan Reynolds as iconic hero Hal Jordan, on Friday (June 17). [See NASA's photo of a 'Green Lantern' nebula]

In reality, the cosmic ring is a region of hot gas and glowing dust sculpted by the powerful light of giant "O" stars, which are the most massive type of star known to exist.

The ring, named RCW 120, is actually glowing in infrared colors that our eyes cannot see, but show up brightly when viewed by the Spitzer telescope's infrared detectors. At the center of this ring are a couple of giant stars whose intense ultraviolet light carved out the bubble, though they blend in with the other stars when viewed in infrared.

RCW 120 is about 4,300 light-years from Earth and does have a central, massive star at its core that is 2.5 million years old, according to previous studies.