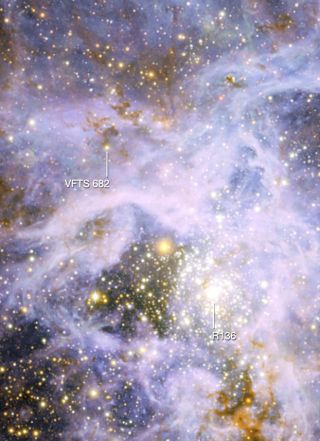 This view shows part of the very active star-forming region around the Tarantula Nebula in the Large Magellanic Cloud, a small neighbour of the Milky Way. At the upper left is the brilliant but isolated star VFTS 682 and at the lower right is the very rich star cluster R 136.
(Image: © ESO/M.-R. Cioni/VISTA Magellanic Cloud survey/Cambridge Astronomical Survey Unit)

Super-bright stars are normally found in the jam-packed centers of star clusters, but scientists have now discovered that one of the most luminous stars known is actually a lone wolf.

This discovery might change how astronomers think stars are born and end up on their own.

The gigantic star, called VFTS 682, is  approximately 150 times the mass of the sun. It lies in the Large Magellanic Cloud, a small galaxy neighboring the Milky Way.

"We were very surprised to find such a massive star on its own, and not in a rich star cluster," said researcher Joachim Bestenlehner, a student at Armagh Observatory in Northern Ireland. "Its origin is mysterious." [Photo of the bright, giant star VFTS 682]

An international team of astronomers detected the star using the European Southern Observatory's Very Large Telescope. It makes its home in a stellar nursery, a giant patch of gas, dust and young stars that is the most active star-forming region in the Local Group of galaxies we call home.

At first, researchers thought VTFS 682 was hot, young and bright, but otherwise rather ordinary.

However, after more closely analyzing its light, they found that we only were seeing a fraction of its light, with much of the star's energy getting absorbed and scattered by dust clouds before it reached Earth. They calculated it was far more luminous than before thought, ranking among the brightest stars known. [Top 10 Star Mysteries]

Although this star appears to lie outside any star cluster now, VFTS 682 is not very far away from the very rich star cluster RMC 136, often called just R 136, which contains several similar "superstars."

"The new results show that VFTS 682 is a near identical twin of one of the brightest superstars at the heart of the R 136 star cluster," said researcher Paco Najarro at the Center of Astrobiology in Madrid.

It might be possible that VFTS 682 formed in RMC 136 and was then hurled out to its current location about 90 light-years from the center of the cluster by gravitational interactions with other stars in that cluster. However, such runaway stars are typically much smaller than VFTS 682 — the largest ones known up to date were roughly 90 times the mass of the sun.

Still, it would be even harder to understand how such a brilliant star could form on its own. "This makes VFTS 682 a really fascinating object," said researcher Jorick Vink at Armagh Observatory in Northern Ireland.

"There are two forces a star has to deal with — gravity trying to pull it together, and pressure from its radiation trying to push it apart," Vink explained. "The photons of these very bright stars exert a very intense pressure, and when you get a star a million times brighter than the sun, it would really blow itself apart, so it's hard to get stars more massive than 10 times the sun."

"This is different in the dense environment of star clusters, where you could get two stars of five solar masses merging to form one of 10 solar masses, and then you can get 20 and so on, in that way hierarchically building up very massive stars," Vink added. "That's why it's such a surprise to see a super-massive star on its own like this."

Super-massive stars like VFTS 682 often do not live a relatively long time  — it may only be about 1 million years old right now, and live another 1 million.

"The fate of this star will be very interesting," Vink told SPACE.com. "What will happen to it? Will it die with a supernova, or let loose a long-duration gamma ray burst, the most powerful kind of explosion known in the universe? Or will it only quietly form a black hole? There is much we want to find out here."

The scientists will detail their findings in a paper that will appear in the journal Astronomy & Astrophysics.