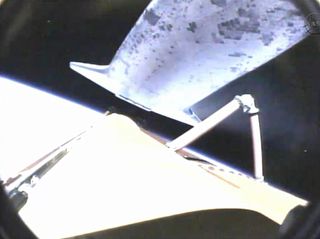 The astronauts aboard the space shuttle Endeavour performed an intensive scan of their orbiter's sensitive heat shield tiles today to make sure they didn't incur any damage during liftoff.

Endeavour launched toward the space station yesterday (May 16) from the Kennedy Space Center in Cape Canaveral, Fla., in a spectacular morning liftoff that began the shuttle's last-ever mission before it is retired later this year along with the rest of NASA's fleet. The shuttle is now chasing the International Space Station to deliver a major space experiment and other supplies. [Photos of Space Shuttle Endeavour's Final Launch]

"Once we got onto orbit, the crew had about five hours of timeline, mostly converting the vehicle from a launch vehicle to orbiting spacecraft and to get the robotic arm checked out in preparation for today's survey," space shuttle lead flight director Gary Horlachersaid in a briefing today (May 17).

"It's good to be waking up in space again," Endeavour's commander Mark Kelly said today as Mission Control roused his crew in the wee hours with the song "Beautiful Day" by U2. The song was picked for Kelly by his daughters Claudia and Claire, and his wife Gabrielle Giffords, an Arizona congresswoman who was shot in the head during a January attack but recovered enough to watch her husband soar into space yesterday morning. [Giffords Says Shuttle Launch Was "Good Stuff"]

"I want to thank Gabby, Claudia and Claire for that great wakeup song," Kelly said. "It's always good to hear. Here's to a beautiful day in space!"

Kelly and his crew awoke at 11:56 p.m. EDT Monday night (0356 Tuesday GMT) and had a busy day of spacecraft inspections ahead. The astronauts used the space shuttle's robotic arm to closely examine the heat shield panels along the shuttle's wing edges and nose cap for any signs of damage from falling debris during launch.

Endeavour is flying a 16-day mission to the International Space Station to deliver and install a sophisticated cosmic ray detector, called the Alpha Magnetic Spectrometer, and a slew of supplies for the orbiting outpost. The shuttle is due to arrive at the station Wednesday (May 18) at around 6:15 a.m. EDT (1015 GMT).

Heat shield surveys have been a standard part of every NASA shuttle flight since the tragic 2003 loss of the shuttle Columbia and its crew. NASA traced the disaster to a piece of foam insulation that fell from Columbia's fuel tank and struck the shuttle's heat shield along its left wing.

Since then, NASA has kept a close watch on shuttle heat shield health during missions. Several inspections, by robotic arms and cameras, are performed on each flight.

Shortly after Endeavour's launch, NASA officials said cameras on the shuttle's external tank showed two small pieces of foam shaking loose during the ascent, but that the incidents were not likely to be a problem. [Endeavour's Lift-off into History]

"Those were very small losses; they didn't look like they went anywhere near the orbiter," said Bill Gerstenmaier, associate administrator for space operations. "Those looked like they're no problem to us at all. The tank performance was probably better than I expected."

Endeavour's crewmembers used sensors on a 50-foot (15-meter) inspection pole attached to the end of the shuttle's robotic arm to inspect the spacecraft. Images and video will be subsequently relayed to NASA's mission control center in Houston for engineering review. [Photos: Shuttle Endeavour's Final Mission]

"The ride to orbit went great, all the imagery we took today is looking really good too," Horlacher said. "I'm not aware of any concerns on the vehicle. We expect to hear initial feedback probably as soon as the crew goes to sleep tomorrow. Hopefully we'll get indication that a focused inspection won't be necessary."

Endeavour lit up the morning sky Monday (May 16) when it lifted off at 8:56 a.m. EDT from Launch Pad 39A at the Kennedy Space Center in Cape Canaveral, Fla.

Endeavour's STS-134 flight is the second-to-last mission of NASA's 30-year space shuttle program and is the 25th spaceflight of Endeavour itself. The agency has one final mission – Atlantis' STS-135 flight in July – before the three-orbiter fleet is retired.