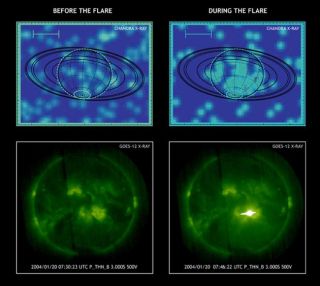 Saturn and the Sun, before and after the flare and its reflection were detected.
(Image: © NASA/Chandra X-ray Center)

Scientists who study the Sun are constantly frustrated by the fact that they can only see half of it at any given moment. Sunspots that grow, die and flare up on the back side can't be monitored.

What's needed is a giant mirror on the other side of the Sun.

Turns out there are two of them, at times.

Saturn reflects X-rays from solar eruptions, astronomers said today. Previous observations found the same phenomenon at Jupiter. So when either of these planets is located on the far side of the Sun, from our point of view, they could be used to monitor back-side solar activity.

"The bigger the planet and nearer to the Sun, the more solar photons it will intercept, resulting in more reflected X-rays," said study leader Anil Bhardwaj, a planetary scientist at NASA's Marshall Space Flight Center.

The observations, which built upon an earlier X-ray study of Saturn, were made with NASA's Chandra X-ray Observatory. This time, researchers were able to tie the X-ray emissions at Saturn to an X-ray flare on the Sun.

Many times, solar flares are accompanied by potentially deadly proton storms, which can reach Earth in a few hours or, as another study this week found, just 15 minutes. Flares can also fuel coronal mass ejections, which are giant clouds of electrified gas that billow into the solar system and take up to a day or more to hit Earth.

Any of these dramatic storm types can be dangerous to astronauts. When one is aimed at Earth, residents of the International Space Station are sometimes ordered into a well-protected module to avoid excess radiation exposure.

If humans travel to Mars, some sort of interplanetary space weather warning system will be needed, especially when the red planet's orbit carries it to the far side of the Sun. With little atmosphere and virtually no protective magnetic field, Mars is naked to space weather. Residents would have to seek shelter during solar storms.

"These results imply we could use giant planets like Jupiter and Saturn as remote-sensing tools," Bhardwaj said. "By reflecting solar activity back to us, they could help us monitor X-ray flaring on portions of the Sun facing away from Earth's space satellites."

X-rays are also emitted from Venus, Mars and the Moon.

"We were surprised to find no clear evidence of auroral X-ray emissions during our observations," Bhardwaj said. "There is much more we have to learn."

The research was detailed in the May 10 issue of the journal Astrophysical Journal Letters.