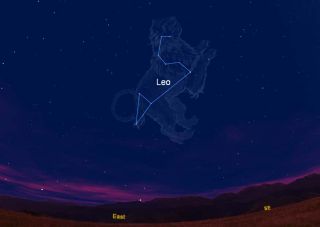 Spring is here, and with it a seasonal star formation is front and center in the night sky.

Spring officially arrived in the Northern Hemisphere on March 20 at 7:21 p.m. Eastern Daylight Time. And this week, about halfway up in the east-southeast sky as darkness falls, the most famous star pattern of the spring season will be found.

The six stars that form a backward question mark are more popularly known as the “Sickle” in the constellation of Leo, the Lion.

The Sickle is an asterism — a noteworthy or striking pattern of stars within a larger constellation. Aside from the Big Dipper, no springtime asterism is as recognizable as the Sickle of Leo.

Garrett P. Serviss(1851-1929), an astronomer and early science fiction writer, once wrote that the Sickle, “hanging so conspicuously in the sky on a spring evening may be imaginatively regarded as a harbinger of the opening of the season when the thoughts of men are turning to preparations for future harvests.”

The Sickle, when rising and climbing the sky, as it is doing now during the early evening hours, is seen cutting upward, and by 11 p.m. EDT it will reach its highest point in the sky, crossing the meridian upright and standing high above the southern horizon. [Why the Night Sky Changes With the Seasons]

In the handle of the Sickle – or the heart of the lion – shines the blue-white star, Regulus. According to Richard Hinckley Allen (1838-1908), who was an expert in stellar nomenclature, this star was known in Arabia as Malikiyy, “the kingly one.” Regulus was seemingly often associated in ancient cultures with royalty and kingly power.

Copernicus has been credited with giving the star its present name, a diminutive of Rex, or king, which may also relate to the four so-called “Royal Stars” (with Aldebaran, Antares and Fomalhaut), all roughly about 90 degrees apart on the sky. Since royalty are usually referred to as "blue bloods,” it seems rather appropriate that the brightest star of the king of the beasts in our nighttime sky is bluish-white in color.

As the brightest star in Leo, first magnitude Regulus is 78 light-years away, meaning that the light you see emanating from it tonight started on its journey toward Earth back in 1933. Its diameter is estimated to be about five times that of the sun, and its luminosity 145 times greater than our star.

Algeiba (“the Lion’s Mane”) is in the curve or the blade of the Sickle, and appears as a single star to the naked eye.  However, as a telescope of only moderate size will clearly show, it is really one of the most beautiful double stars in the sky. It is best observed in twilight or bright moonlight to reveal the contrasting colors – one star has been said to be greenish, the other a delicate yellow.  Others, however, have described different hues such as pale yellow and orange, reddish and golden yellow and even pale red and white!

Directly above Algeiba in the Sickle is Adhafera ("the lock of hair”). Binoculars show this star to be the most conspicuous member of a small asterism of four stars. The three brightest form a straight line.

Eastward from the Sickle there is a right triangle of stars that also belong to Leo.  At the eastern point of this triangle you will find Denebola, (“The Lion’s Tail”). To modern sky watchers the Sickle outlines the majestic head and mane of a great westward-facing lion, with the triangle forming the lion’s forequarters.  He is crouching in the regal pose somewhat resembling the enigmatic Sphinx.

Astronomer Henry Neely, who a half century ago was a popular lecturer at New York’s Hayden Planetarium, would often use his electric pointer to draw attention to these stars and would then exclaim: “Behold!  Here is the lion known as Leo.  A conception that was familiar to the peoples of many lands long before a certain motion-picture company adopted him as its trademark.”

Ironically, the informal motto of the company he was referring to, Metro-Goldwyn-Mayer Studios (MGM), is "more stars than there are in heaven."